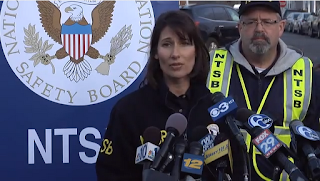 The US National Transportation Safety Board (NTSB) has now commenced an investigation of the train accident in Paulsboro, New Jersey where a moveable bridge collapsed and the 84 car train, with 4 cars of toxic substance crashed into a creek spilling hazardous vinyl chloride. 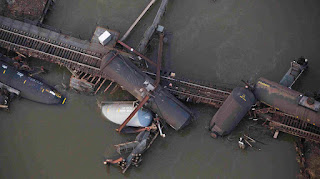 The same bridge was had collapsed in 2009, when a train pulling coal cars came off its tracks after the railroad bridge over the Mantua Creek collapsed and sent 16 cars into the water. The bridge was “an old structure,” and its original “A” frame dated back to 1873. The train has two locomotives and 83 freight cars. 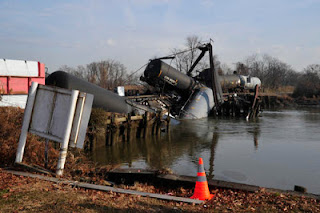 One tanker containing 25,000 gallons of vinyl chloride. It was breached in the accident. The gas leaked into the air, while the rest turned into a solid and settled into the bottom of the tanker. Elevated levels of vinyl chloride were detected in a 12 block radius and over 500 people were evacuated last night. Approximately 70people have been treated at the local hospital. No fatalities have yet to be reported.