The US Occupational Safety and Health Administration (OSHA) has issued safety precautions to be taken by workers who are responding to the British Petroleum oil spill.

The original workers' compensation acts of 1911 did not consider occupational illnesses and diseases compensable events. Through the years that has changed and those conditions are now compensable in most jurisdictions. The American legal system, which was based upon British common law, rapidly developed a need to adopt a mechanism for the delivery of benefits to injured workers during the early 20th century. The initial workers' compensation statutes adopted by numerous states were based upon the British statute which provided for compensation benefits in cases in which traumatic accidents had occurred but not in cases in which occupational disease was involved. While the British statute was amended by 1906 to include occupational disease, none of the American statutes reflected this modification at the time of their enactment.

"Marine oil spill responders face a variety of health and safety hazards, including fire and explosion, oxygen deficiency, exposure to carcinogens and other chemical hazards, heat and cold stress, and safety hazards associated with working around heavy equipment in a marine environment. A full discussion of these hazards is beyond the scope of this training booklet, but a brief list of hazards and their known health consequences is shown in Table 1 [see below]. Your workers should be trained to anticipate and control exposure to the hazards associated with their assigned duties.

"To determine acceptable levels of exposure and train your workers about them, consult OSHA's exposure limits in Subparts G and Z. If OSHA does not regulate an exposure of concern, consult the National Institute for Occupational Safety and Health (NIOSH) Recommended Exposure Limits (RELs) and Immediately Dangerous to Life and Health (IDLH) levels. If neither OSHA nor NIOSH has established a limit, consult the American Conference of Government Industrial Hygienists (ACGIH) Threshold Limit Values (TLVs) and Biological Exposure Indices (BEIs) for chemical, physical, and biological agents. You may use a more protective limit than OSHA's if one has been established and plan your controls accordingly. Material Safety Data Sheets from the product manufacturer may provide useful information for worker training.

"Additional Hazards Marine oil spill responders need training to work safely around these and other potential hazards. You should decide which hazards apply to your operations.
Hazards of exposure include the following: 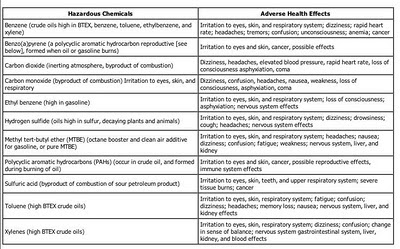 To read more about petroleum exposure and workers' compensation.
Click here for more information on how Jon L Gelman can assist you in a claim for workers' Compensation claim benefits. You may e-mail Jon  Gelman or call 1-973-696-7900.
Read the OSHA Informational Booklet.
Posted by Jon L. Gelman at Friday, June 04, 2010