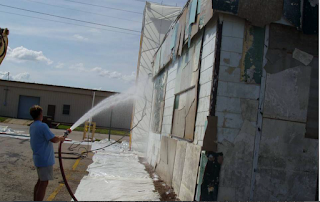 The U.S. Environmental Protection Agency's Inspector General has just signed an "Early Warning Report" that will shut down a dangerous and unapproved asbestos removal method that two EPA offices have been testing for the past seven years.

The report supports what Public Justice has been arguing -- that the method both endangers public health and doesn't work.

The approved method requires all asbestos to be removed from a building by trained specialists wearing protective gear before it is demolished. Under the unapproved method, called the "Alternative Asbestos Control Method," or AACM, most of the asbestos-containing materials are left in place during demolition. Water with added surfactants is sprayed on the building to try to suppress asbestos release and contamination.

For over 3 decades the Law Offices of Jon L. Gelman  1.973.696.7900  jon@gelmans.com have been representing injured workers and their families who have suffered occupational accidents and illnesses.