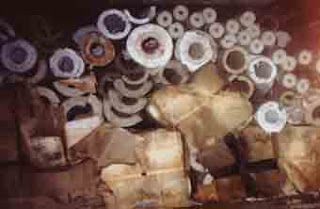 The occupational exposure to asbestos fiber has now been linked to fatal heart disease. A recent report associates asbestos exposure at work to a higher risk of dying from cardiovascular disease.

"Methods Cardiovascular disease mortality in a cohort of 98 912 asbestos workers, with median follow-up of 19 years, was analysed. Unadjusted and smoking-adjusted standardised mortality ratios (SMRs) were calculated. The association between indicators of asbestosexposure and mortality was analysed with Poisson regression models, for deaths occurring during the period 1971–2005.

"Results Altogether 15 557 deaths from all causes, 1053 deaths from cerebrovascular disease and 4185 deaths from ischaemic heart disease (IHD) occurred during follow-up. There was statistically significant excess mortality from cerebrovascular disease (SMR: men 1.63, women 2.04) and IHD (SMR: men 1.39, women 1.89). Job and birth cohort were associated with the risk of cerebrovascular and IHD mortality in the Poisson regression model including sex, age, smoking status, job, cohort and duration of exposure. For IHD only, duration of exposure was also statistically significant in this model.

.....
For over 3 decades the Law Offices of Jon L. Gelman 1.973.696.7900 jon@gelmans.com have been representing injured workers and their families who have suffered work related accident and injuries.