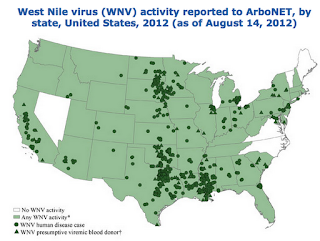 Based on reports from the  United States Centers for Disease Control (CDC) arial spraying of pesticides has been mandated in Texas because of the number of reported cases of West Nile Flu. Questions are now being raised as to the availability of workers' compensation benefits for workers who suffer illnesses flowing from the consequences of pesticide exposures.

The arial spraying of Dallas County commenced last night  with two planes being utilized, and will be continuing over the next few evenings in order to battle the mosquito population that is spreading the disease. The population is being requested to remain indoors to avoid exposure.

The state of Texas is not the only area in the United States where West Nile Flu is now spreading and preventive measures are being taken to stem the potential of an epidemic of illness. Throughout United States during 2012 there has been an increase in the amount of cases it being reported. See the CDC map above.

In most jurisdictions, workers' compensation benefits are available as a result of occupational exposures. There is the potential for a surge of claims as the network of benefits programs remains unprepared, especially in its beleaguered state. More preparation needs to be undertaken to handle such potential consequences such as a West Nile epidemic.

Read other blog posts about flu


The Urgent Need for Workers Compensation Flu Pandemic Planning
Sep 15, 2009
The 2009 influenza pandemic (flu) has created a new framework of acts and regulations to respond the World Health Organization's (WHO) phase 6 pandemic alert. Governmentally imposed employment disruptions resulting...
http://workers-compensation.blogspot.com/
Compensating Adverse Flu Vaccine Reaction Victims
Oct 24, 2009
As the US flu vaccination program rolls out, the numbers are also growing for those who have reported adverse consequences from the H1N1 vaccine. The victims and their families are also lining up for benefits available in ...
http://workers-compensation.blogspot.com/
Workers' Compensation: The Compensability of a Swine Flu Pandemic
Apr 24, 2009
The CDC has reported that Swine flu has impacted the US in the past: "Like seasonal flu, swine flu in humans can vary in severity from mild to severe. Between 2005 until January 2009, 12 human cases of swine flu were ...
http://workers-compensation.blogspot.com/
Workers' Compensation: OSHA Sets H1N1 Flu Employer ...
Nov 27, 2009
The OSGA directive closely follows the prevention guidance issue by The Centers for Disease Control (CDC) to prevent the spread of H1N1 flu. The purpose of the compliance directive is "to