Health Care Continues to Eat Away at Employee Earnings 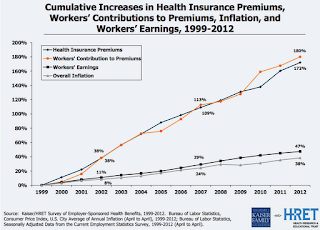 Throughout the nation Workers' Compensation systems have been impacted by health care costs that now take a large piece of the premium dollar. Traditional health care offered by employers mirrors the same problem of economic stress. Running two parallel systems creates added costs and  delays the delivery of medical care. The recent Kaiser Survey just released for 2012 reports that costs in the health care field continue to outpace employee compensation.

Annual premiums for employer-sponsored family health coverage reached $15,745 this year, up 4 percent from last year, with workers on average paying $4,316 toward the cost of their coverage, according to the Kaiser Family Foundation/Health Research & Educational Trust (HRET) 2012 Employer Health Benefits Surveyreleased today.

This year’s premium increase is moderate by historical standards, but outpaced the growth in workers’ wages (1.7 percent) and general inflation (2.3 percent). Since 2002, premiums have increased 97 percent, three times as fast as wages (33 percent) and inflation (28 percent).

“In terms of employee insurance costs, this year’s 4 percent increase qualifies as a good year, but it still takes a growing bite out of middle-class workers’ wages, which have been flat or falling in real terms,” Kaiser President and CEO Drew Altman, Ph.D. said.

“Premium growth is at historic lows, which greatly benefits workers. Continuing to ensure that Americans have coverage options that are affordable is vitally important for our nation’s health,” said Maulik Joshi, Dr.P.H., president of HRET and senior vice president for research at the American Hospital Association.

The 14th annual Kaiser/HRET survey of more than 2,000 small and large employers provides a detailed picture of trends in employer-sponsored health insurance costs and coverage. In addition to the full report and summary of findings being released today, the journal Health Affairs is publishing a Web First article with select findings, and Dr. Altman authored a “Pulling It Together” column reflecting on this year’s results.

Workers at lower-wage firms on average pay $1,000 more each year out of their paychecks for family coverage than workers at higher-wage firms ($4,977 and $3,968, respectively). This occurs even though the firms with many lower-wage workers on average pay less in total premiums for family coverage than firms with many higher-wage workers ($14,694 and $16,427, respectively).

In addition, workers at lower-wage firms are also more likely to face high deductibles than those at higher-wage firms. Specifically, 44 percent of covered workers at firms with many low-wage workers face an annual deductible of $1,000 or more, compared with 29 percent of those at firms with many high-wage workers. Across all employers, a third of covered workers (34 percent) face a deductible of that size, including 14 percent with deductibles of at least $2,000 annually.

“This year’s survey suggest that working families at the low end of the wage scale face significant out of pocket costs for coverage,” said study lead author Gary Claxton, a Kaiser Vice President and director of the Foundation’s Health Care Marketplace Project. “Firms with many lower-wage workers ask employees to pay more out of pocket than firms with many higher-wage workers even though the coverage itself tends to be less comprehensive.”

The survey estimates that 2.9 million young adults are currently covered by employer plans this year as a result of a provision in the 2010 Affordable Care Act that allows young adults up to age 26 without employer coverage of their own to be covered as dependents on their parents’ plan. That’s up from the 2.3 million in the 2011 survey. Young adults historically have been more likely to be uninsured than any other age group.

The survey also finds that 48 percent of covered workers are in “grandfathered” plans as defined under health reform, down from 56 percent last year. Grandfathered plans are exempted from some health reform requirements, including covering preventive benefits with no cost sharing and having an external appeals process. To retain this status, employers must not make significant changes to their plans to reduce benefits or increase employee costs.

These early reports may not match what employers and workers ultimately end up paying next year, as firms can raise deductibles or otherwise change the health benefits and plans they offer to lower premiums. This year, for example, more than half (54 percent) of employers who offer health benefits reported that they had shopped around for new coverage. Of that group, significant shares switched carriers (18 percent) or changed the type of plans they offer (27 percent).

Other findings from the study include:
Worker-only coverage. Premiums for worker-only health coverage increased 3 percent in 2012 to reach $5,615 annually. Workers on average pay $951 toward this coverage.
Offer rate. This year, 61 percent of firms offer health benefits to their workers – statistically unchanged from last year.

Cost-sharing for office visits, emergency care and drugs. Covered workers facing co-payments for in-network physician office visits on average pay $23 for primary care and $33 for specialty care. For emergency-room visits, average co-pays are $118. For drug plans with three or more tiers, average co-pays are $10 for generic drugs, $29 for preferred brand-name drugs, $51 for non-preferred brand-name drugs, and $79 for specialty drugs.
Domestic partner benefits. In 2012, 31 percent of employers offer health benefits to same-sex domestic partners, up from 21 percent three years earlier. This year 37 percent of firms offer such benefits to unmarried opposite-sex partners, up from 31 percent in 2009.
Flexible Spending Accounts and Pre-Tax Premiums. Large employers are more likely than small ones to allow workers to pay their share of premiums with pre-tax income (91 percent, compared to 41 percent) and to contribute pre-tax dollars to Flexible Spending Accounts (76 percent, compared to 17 percent).

Now in its 14th year, the survey is a joint project of the Kaiser Family Foundation and the Health Research & Educational Trust. The survey was conducted between January and May of 2012 and included 3,326 randomly selected, non-federal public and private firms with three or more employees (2,121 of which responded to the full survey and 1,205 of which responded to a single question about offering coverage). A research team at Kaiser, HRET and NORC at the University of Chicago, led by Kaiser’s Gary Claxton, designed, conducted and analyzed the survey. For more information on the survey methodology, please visit the Survey Design and Methods Section at http://ehbs.kff.org.
....
For over 3 decades the Law Offices of Jon L. Gelman 1.973.696.7900 jon@gelmans.com have been representing injured workers and their families who have suffered work related accident and injuries.

More about "health care"
Preparing For US Supreme Court Health Care Decision Day
Jun 21, 2012
Preparing For US Supreme Court Health Care Decision Day ... Supreme Court blog will be among first with health care decision ... Health Hazard Alert: Hydraulic Fracking Workers Su... Unlawful Asbestos Removal Results in ...
http://workers-compensation.blogspot.com/
Clint Eastwood at the 2012 Republican National Convention
Sep 04, 2012
While both Democrats (79%) and Republicans (52%) agree that the nation's health care system is "poor," both Democrats (46%) and Republicans (28%) agree that it does not need to be completely rebuilt. Both parties content ...
http://workers-compensation.blogspot.com/
Healthcare Budget Double Talk and the Walker Recall
Feb 16, 2012
Now, Governor Walker, in a misguided attempt to balance the budget, wants to cut an additional 50,000 adults from the State's health care rolls. In a remarkable display of political doublespeak, Walker's administration– which...
http://workers-compensation.blogspot.com/
NIOSH Alerts Home Healthcare Workers About Latex Allergies
Feb 15, 2012
NIOSH (The National Institute for Occupational Health and Safety) has published a booklet to educate Home Healthcare Workers about preventing latex allergies. Latex products are made from natural rubber, and sensitivity...
http://workers-compensation.blogspot.com/