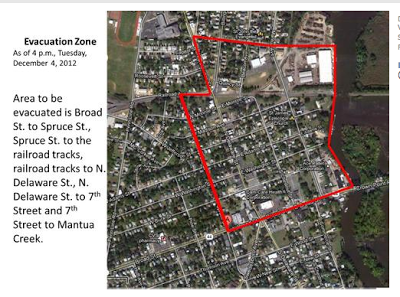 The US Coast Guard has expanded the evacuation zone in Paulsboro NJ (Gloucester County)  following the toxic derailment of a train carrying deadly cancer causing vinyl chloride. Evacuations have been mandatory since last Friday when a movable bridge failed to function and collapsed when a freight train was moving over it.

The National Transportation Safety Administration (NTSB) is co-ordinating an intensive accident investigation. The NTSB reported yesterday that the bridge had problem and that the train engineer contacted a Conrail dispatcher for authorization to cross the bridge even though the bridge signal was red indicating bridge trouble. The NTSB also reported that the bridge was inspected by two Conrail supervisors shortly before the event because of trouble signal being sent by the bridge safety mechanism.