US Supreme Court to Determine Who is A Dependent 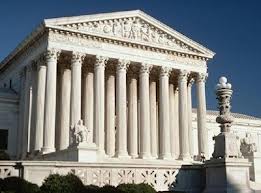 The US Supreme Court (SCOTUS) it's going to come intricately involved in determining who is a beneficiary  dependency benefits in workers' compensation claims when it renders it's decision on the validity of same-sex marriages. The decision to be rendered by SCOTUS will have tremendous impact on evaluating dependency benefits throughout the nation.

When an injury on the job injury dependency benefits or afforded to certain individuals. Those include statutory dependence such as spouses and children.

Dependency status confers an obligation by the insurance company/employer to pay benefits for extended periods of time. Dependency benefits are usually paid to the surviving spouse for the duration of their lifetime.

"The US Supreme Court [official website] on Friday granted certiorari [order list, PDF] in two cases dealing with same-sex marriage [JURIST backgrounder]. InHollingsworth v. Perry [docket; cert. petition, PDF] the court will consider the validity ofProposition 8 [JURIST news archive], a California referendum that revoked same-sex marriage rights. Same-sex marriage was briefly legal in California following a state Supreme Court decision and then overturned with a constitutional amendment created by Proposition 8. Early in the proceedings, the state of California declined to defend the law, and the backers of Proposition 8, ProtectMarriage.com [advocacy website], successfully intervened. The court will consider whether Proposition 8 is constitutional under the Equal Protection Clause of theFourteenth Amendment as well as if the Proposition 8 supporters had standing to intervene under Article III [LII Cornell backgrounders].

"The court also granted United States v. Windsor [docket; cert. petition, PDF], which examines the constitutionality of Section 3 of the Defense of Marriage Act (DOMA) [text; JURIST news archive]. The case concerns Edith Windsor [ACLU backgrounder], a widow who had a legal same-sex marriage under Canadian and New York law but was denied spousal deduction for federal estate taxes when her wife died. The Supreme Court will consider the constitutionality of DOMA under the Fifth Amendment [LII Cornell backgrounder]. Prior to her challenge, the US Department of Justice (DOJ) announced that it would no longer defend DOMA in courts, and in response, the US House of Representatives formed [JURIST reports] the Bipartisan Legal Advisory Group (BLAG) to defend the law. The court will also consider if BLAG had standing to intervene and if the DOJ's refusal to defend the law deprives the Supreme Court of jurisdiction. The Windsor court held homosexuals to an intermediate scrutiny standard of review. The other petitions concerning same-sex marriage remain on hold.