Exposure to lead can cause serious medical problem in both children and adults. Strict safety precautions must be observed when working with lead.

Many initial occupational exposure claims in workers' compensation resulted from the 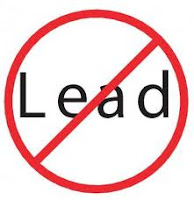 exposure to lead in factories. Lead pigment was used in paints for many years leading to a many serious blood disorders and neurological conditions.

The U.S. Department of Labor's Occupational Safety and Health Administration has cited Henry RAC Holding Corp. with four repeat and four serious safety and health violations, including workers exposed to lead hazards, at the company's Bayonne facility. The inspection was initiated in September 2012 after health hazards were discovered during an earlier OSHA safety inspection at the facility. Proposed penalties total $72,000.

Carrying a $46,800 penalty, the repeat violations include failing to develop and implement a written respiratory protection program for lead exposure; medically evaluate, conduct fit tests and provide annual training on the proper fit, use, limitation and maintenance for half mask negative pressure respirators to protect against lead; make an initial determination on whether lead exposure was above the action level; ensure surfaces were maintained as free as practicable from lead accumulation; develop and implement a hazard communication program on chemical hazards; and provide training to workers on chemical hazards. A repeat violation is issued when an employer previously has been cited for the same or similar violation of a standard, regulation, rule or order at any other facility in federal enforcement states within the last five years. The same violations were cited in 2008.

The serious violations, with a $25,200 penalty, involve failing to implement a hearing conservation program and training program and provide annual audiograms for workers exposed to noise above 85 and 90 decibels; properly store a respirator to prevent its exposure to chemicals, such as lead; implement a medical surveillance program for workers who may be exposed to lead above the action level; provide medical surveillance at no cost to the worker; and make medical surveillance available upon a worker's notification of signs and symptoms of lead intoxication. A serious citation is issued when there is substantial probability that death or serious physical harm could result from a hazard about which the employer knew or should have known.

"Exposure to lead and noise in the firearms manufacturing industry has been well-known for decades" said Kris Hoffman, director of OSHA's area office in Parsippany. "OSHA's standards must be followed to protect workers from exposure that can lead to lead-related illness and occupational hearing loss."

Detailed information about OSHA's standards on lead can be found at http://www.osha.gov/SLTC/lead/index.html.