The area around the NJ Turnpike has long been called "Cancer Alley," the the US EPA is now going to investigate past dumping of cancer causing substances in the New Jersey Meadowlands near the Hackensack River. 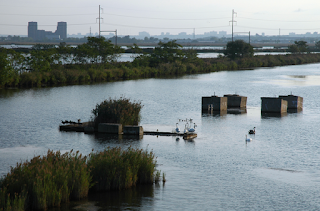 Apogent Transition Corp., Beazer East, Inc., Cooper Industries, LLC and Occidental Chemical Corporation to conduct a study of the contamination at the Standard Chlorine Chemical Company, Inc. Superfund site in Kearny, New Jersey as part of the cleanup plan for the site. The site, which is in the New Jersey Meadowlands and is next to the Hackensack River, is contaminated with a number of hazardous chemicals including polychlorinated biphenyls (PCBs) and dioxin. The study of the nature and extent of the contamination and an evaluation of potential cleanup methods are essential steps in the cleanup process. The estimated value of the study work is $750,000. The companies will also pay for the EPA’s costs in overseeing the performance of the study.

Fish consumption advisories have been issued for the Hackensack River due to the PCBs and dioxin contamination, originating in part from the Standard Chlorine site. PCBs are likely cancer causing chemicals and can have serious neurological effects. Exposure to dioxin can also result in serious health effects, including cancer.

“This agreement marks an important step in the cleanup of the Standard Chlorine Chemical site,” said EPA Regional Administrator Judith A. Enck. “Today’s agreement illustrates how the Superfund law works to make polluters, not taxpayers, pay to clean up sites like this one.”

The 25-acre site was formerly used for chemical manufacturing by various companies from the early 1900s to the 1990s. Operations at the site included the refinement of naphthalene for use in the production of certain industrial products, the processing of liquid petroleum naphthalene and the manufacturing of lead-acid batteries, drain-cleaner products and the packing of dichlorobenzene products. The soil, ground water and two lagoons were contaminated with dioxin, benzene, naphthalene, PCBs and volatile organic compounds. The site was originally littered with tanks and drums containing hazardous substances including dioxin and asbestos. Prior to placement on the Superfund list, the New Jersey Department of Environmental Protection sampled and studied the site and partially cleaned it up along with instituting measures to contain the pollution in the short-term. At the request of the NJDEP, the EPA added the site to the Superfund list in September 2007.

Previous actions have been taken by parties responsible for the pollution with oversight by the NJDEP and the EPA to address the immediate risks to public. The dioxin and asbestos have been collected and disposed of at facilities licensed to receive the waste. Contaminated buildings on-site were demolished and removed. The two contaminated lagoons were emptied of water, filled with clean material and covered. A slurry wall was installed between the site and the Hackensack River to keep contamination from moving into the river. A system of pumps is being used to bring the polluted ground water to the surface where it can be cleaned. Fish consumption warnings have been issued for the Hackensack River. The study and evaluation of potential cleanup technologies will be conducted under the legal agreement announced today before the EPA issues a proposed cleanup plan for the remaining work at the site.

The Superfund program operates on the principle that polluters should pay for the cleanups, rather than passing the costs to taxpayers. After sites are placed on the Superfund list of the most contaminated waste sites, the EPA searches for parties responsible for the contamination and holds them accountable for the costs of investigations and cleanups. To date, the cleanup of the Standard Chlorine Chemical Company, Inc. Superfund site is being conducted and paid for by the responsible parties with oversight by the EPA.
......
For over 4 decades the Law Offices of Jon L. Gelman  1.973.696.7900  jon@gelmans.com have been representing injured workers and their families who have suffered occupational accidents and illnesses.  Click here now to submit a case inquiry.