A recent study highlights the nation's disparity on the cost of medicine. The study also recommends that Medicare continue to pay varying medical fees by jurisdiction. In many states, workers' compensation medical fees are based upon Medicare guidelines. 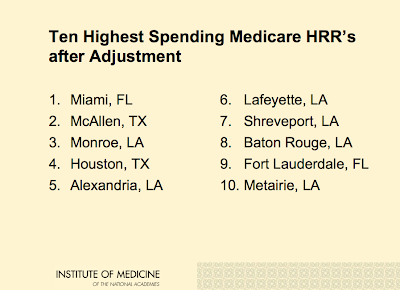 "For over three decades, researchers have documented large, systematic variation in Medicare fee-for-service spending and service use across geographic regions, seemingly unrelated to health outcomes. This variation has been interpreted by many to imply that high spending areas are overusing or misusing medical care. Policymakers, seeking strategies to reduce Medicare costs, naturally wonder if cutting payment rates to high cost areas would save money without adversely affecting Medicare beneficiary health care quality and outcomes.

"Yet, many have cautioned that geographically-based payment policies may have adverse effects if higher costs are caused by other variables like beneficiary burden of illness, or area policies that affect health outcomes. Further, if there are substantial differences in provider practice patterns within regions, cutting payments to all providers within a region would unfairly punish low cost providers in high-spending regions and unfairly reward high cost providers in low spending regions. Little work has been conducted to evaluate variation in the private insurance market, which represents around 45 percent of United States health insurance expenditures. Even less is known about geographic variation in the Medicaid program and other vulnerable populations. 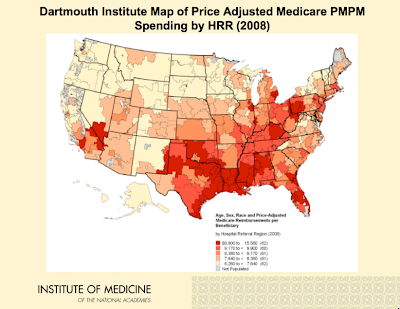 "In 2009, a group of U.S. House of Representatives members, known as the Quality Care Coalition, asked the Secretary of the U.S. Department of Health and Human Services, Kathleen Sebelius, to sponsor two IOM studies focused on geographic payments under Medicare, independent of final health reform legislation. The first study evaluated the accuracy of geographic adjustment factors used for Medicare payment, which alter physician and hospital payments based on specific, geographically-based input prices. This second study asked the IOM Committee on Geographic Variation in Health Care Spending and Promotion of High-Value Care to investigate geographic variation in health care spending and quality and to analyze Medicare payment polices that might encourage high-value care, including adoption of a geographically-based value index, that would modify provider payments based on composite measures of cost and quality of geographic-area performance.

"In March 2013, the IOM released an interim report on geographic variation in health care spending.