Today's post was shared by Steven Greenhouse and comes from money.cnn.com 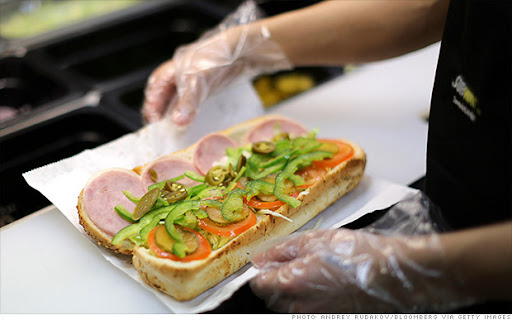 McDonald's gets a lot of bad press for its low pay. But there's an even bigger offender when it comes to fast food companies underpaying their employees: Subway.

Individual Subway franchisees have been found in violation of pay and hour rules in more than 1,100 investigations spanning from 2000 to 2013, according to a CNNMoney analysis of data collected by the Department of Labor's Wage and Hour Division.

Each investigation can lead to multiple violations and fines. Combined, these cases found about 17,000 Fair Labor Standards Act violations and resulted in franchisees having to reimburse Subway workers more than $3.8 million over the years.

It's a significant sum considering many Subway "sandwich artists" earn at or just above the minimum wage of $7.25 an hour.

The next most frequent wage violators in the industry are McDonald's and Dunkin' Donuts stores.

The numbers only reflect unlawful acts that have been caught. To be fair, Subway has more than 26,000 locations throughout the country -- the most of any fast food chain -- so it might not be surprising that it also tops the list of offenders.

That said, Subway's problems were considered serious enough to prompt the Department of Labor (DOL) to partner with the company's headquarters to boost compliance efforts last year.

"It's no coincidence that we approached Subway because we saw a significant number of violations," a Department of Labor spokesperson said.