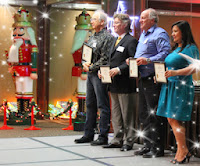 The California Highway Patrol, criticized in the past for exploitative "Chief's Disease," has a program in place that demonstrates that workers' compensation can accomplish amazing things when all of the right motivations are in all of the right places and everyone does their job.

Mitchell lost his leg in 2011 in an automobile crash when he was responding to a call in Amador County. His car hit a tree so violently that he doesn't remember the crash at all, and his injuries were so severe his right leg had to be amputated.

His employer offered him a chance to return to the force, but he had to prove himself physically (and mentally) capable by going through the academy again, this time with a computerized prosthetic that is the stuff of imagination 40 years ago (think "Six Million Dollar Man" with actor Lee Majors as the star).

The prosthetic didn't cost millions - the article says it cost about $100,000.

“I have kids at home and I can’t let them see me quit,” he tells his interviewer.

After going through retraining and passing the physical assessment tests he regained his uniform and is back on the job patrolling in a CHP cruiser.

“I love doing it,” he said, reflecting the attitude that is necessary for an injured worker to overcome huge obstacles. “I love being out in the public.”

According to the story, there are four other full time officers who are amputees.

I'm sure there are also many failure stories where benefits were not provided timely, or there is a dispute about treatment or indemnity, or where an officer attempts to take advantage of the generous disability compensation system in place for California peace officers.

Those negative situations get a lot of attention. It's easy to focus on the bad, to criticize, and blame.

It's much harder to be successful, to overcome huge obstacles, to achieve cooperation between the many people that need to contribute for a successful outcome - that requires communication, vision, and a huge helping of positive attitude.

The CHP says on its website that, "When injuries occur, our obligation is to ensure all appropriate benefits are accessed and received by those injured employees."

I have to believe that statement when I see a story such as Mitchell's.

We at WorkCompCentral believe that success should be celebrated. So much of workers' compensation is draped in negativity - after all, going through a life altering event such as a work injury is steeped in uncertainty, stress and disappointment.

But there are success stories, many of them. We don't hear about those, and some people have been critical of the Comp Laude Awards for injured workers stating that we are making a mockery of the system.

Nothing could be further from the truth, and the fact is that we have had many, many injured workers nominated, and many other injured workers praising our efforts to recognize people who have overcome the odds.

And this happens with the help of the teams of people, the employers, claims adjusters, doctors, attorneys, doing their jobs the best they can.

Stay in this industry long enough and cynicism can dominate your thoughts.

Workers' compensation does good things. We just don't hear about them very often.

When you go to work this morning, do good things - make a case work properly, get an injured worker back on the job, celebrate positive outcomes!

And join us Saturday, December 6, to recognize people and companies that make a difference.