What has NJ Gov. Chris Christie done for Workers' Compensation? It appears that he has done little to nothing except, complain it needs reform.

The State's antiquated workers' compensation system continues with a reverse social security offset that favors insurance companies to the detriment of the nation's taxpayers. NJ administratively refuses to allow COLA increases under the Triennial Redetermination Social Security program to those totally disabled workers who receive benefits and NJ continues to allow insurance companies and employers to reap benefits at the detriment of injured employers. NJ still maintains an antiquate, objectionable, obsolescent and costly Second Injury Fund for pre-existing injuries when the vast majority of states have terminated such programs.

Unproductive bullying of the public at the NJ Governor's "town hall meetings" has become a trademark of his administration. The excitement and approval of "the entertainment value" of those events in the past caught the attention of the public at the emergence of his administration and allowed him to gain popularity. That has now faded has Governor Christie's public approval, according to recent polls in NJ, is declining. 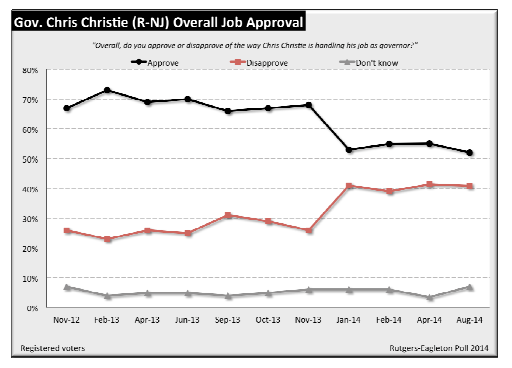 In the meantime, Gov. Christie criticizes NJ workers' compensation and lacks an announced plan to correct the ailing system.

“'We’re  going to be coming up with a package of proposals that’s going to work both sides of that,' Christie told a caller on his monthly NJ 101.5 FM radio show tonight.

When the Chris Christie-for-president chatter first started, in 2011, voters in his home state of New Jersey took pride in having a celebrity governor. As Nancy Reagan escorted Mr. Christie to his speech at her husband’s presidential library, and hedge fund billionaires, The Weekly Standard and The Wall Street Journal’s editorial pages urged him to run, his approval ratings jumped. Voters told pollsters the national attention made him more effective, and improved their state’s long-maligned image.

Four years later, with Governor Christie again considering a run for president, his constituents appear to be tiring of the whole routine.

Polls taken over the last three months reveal a list of home-state complaints: Mr. Christie’s favorability is at its lowest point, with more voters disapproving than approving of his job performance. New Jersey residents think he is making decisions with an eye on his national standing rather than on what is good for their state. They do not think he should run for president — they are, as the slogan goes, ready for Hillary — but most expect he will, and want him to resign if he does. Political talk in New Jersey centers less on Mr. Christie running for president and more on which one of three Democrats quietly seeking to succeed him will win — even though that election is three years away.