Senator Gillibrand: We Have a Moral Obligation to Care for 9/11 Heroes, Survivors & Their Families

As the Zadroga Act slowly journeys to expiration, Senator Kristen Gillibrand (D-NY) declared that, “We Have a Moral Obligation to Continue to Provide the Critically Needed Care and Compensation That Our 9/11 Heroes, Survivors and Their Families Deserve." 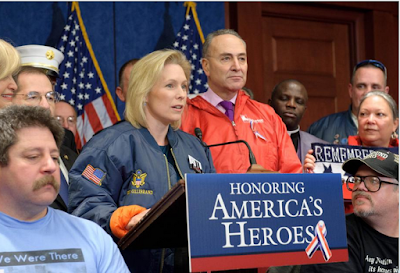 Two of the Zadroga bill’s critical programs - the World Trade Center (WTC) Health Program and the September 11th Victim Compensation Fund – are set to expire in September 2015 and October 2016. Senator Gillibrand along with a bipartisan group of Senators and members of the House of Representatives in April introduced the James Zadroga 9/11 Health and Compensation Reauthorization Act to permanently extend these programs.

Nearly 14 years after September 11th, first responders and survivors are battling serious health conditions resulting from exposure to toxins at Ground Zero. More than 33,000 9/11 responders, as well as survivors of the attacks, including area residents, workers and children, have an illness or injury caused by the attacks or their aftermath, and over two-thirds of those have more than one illness. So far, 4,385 cancers have been found among 9/11 responders and survivors, according to data from the Centers for Disease Control. Many first responders are disabled and can no longer work, and suffer from a host of chronic diseases: asthma, obstructive pulmonary disease, gastroesophageal reflux disease, cancer and many more, caused by exposure to toxins and carcinogens at Ground Zero.

Responders came from all over the country to aid in the response to the attacks. And some area survivors, including area residents, workers and children harmed by the disaster, have since moved and are currently receiving care in cities and states across the country. Participants enrolled in the World Trade Center Health Program for treatment currently reside in all 50 states and in 429 of the 435 Congressional Districts in the country.

“Our first responders answered the call of duty when our nation was under attack, and deserve to be treated by Congress as the veterans they really are,” said Senator Gillibrand. “We cannot abandon the men and women who now suffer as a result of their sacrifice, and must pass a permanent extension of the programs they rely upon. These heroes should not have to walk the halls of the Capitol to beg for the benefits they have earned, and I will proudly walk with them until we secure the health and compensation programs they deserve."

“In the fall of 2001 and in the months that followed, we repeatedly told our first responders we would be there for them,” said Staten Island Borough President James Oddo. “That obligation doesn’t end in 2015. That obligation doesn’t end.  It’s rather simple -- we have a responsibility to take care of the 9/11 responders and survivors who are living with illnesses or injuries caused by the attacks and their aftermath. These heroes were there for us then and I am relieved folks like Senator Gillibrand are aggressively fighting to ensure we continue being there for them.”

“When terror struck our city on Sept. 11, these first responders -- many of whom are now constituents of mine -- rushed in to save their fellow Americans,” said Councilwoman Debi Rose. “We vowed then never to forget the sacrifices they made, and now it is time to honor that vow and continue providing them with the care and insurance they deserve. We shouldn't have to rally to reauthorize this bill. The fact that we are doing so illustrates either the backward priorities of some in Washington or the dysfunction there. We owe this bill to those who put their lives and health on the line for all of us. I commend Sen. Gillibrand for her leadership on this important issue, and I call on her colleagues to join her in reauthorizing the James Zadroga 9/11 Health and Compensation Act.”

“Signing onto the Zadroga bill may have been my first act as Congressman, but the fight to help our 9/11 victims and their families endures,” said Congressman Dan Donovan. “I will continue fighting for as long as it takes to get this funding in place for our heroes. This is not just a New York issue and it's not just another program on a line item in the budget; it's about helping those who paid a price for helping for us in our darkest hour. I want to thank Senator Gillibrand, Congresswoman Maloney, Congressman King and my other colleagues for their steadfast leadership on this issue. We won't rest until this is done.”

“There is no clock running on the diseases that afflict hundreds of police officers today as a result of the exposure to the toxins and carcinogens during the rescue, recovery and cleanup from the attack,” said Patrick J. Lynch, President of the Patrolmen’s Benevolent Association of the City of New York. “The men and women of the NYPD asked no questions when the call came to respond during our country’s moment of need.  The nation has an obligation to care for all the first responders who came from every part of America and who suffer today from exposure related diseases.  It is imperative that Congress pass a permanent extension of these critical Zadroga bills that care for those who risked their lives when needed the most.”

“Anything short of permanently extending this life saving piece of legislation for 70,000 plus American's is a failure on every level and a reflection on poor leadership in DC,” said John Feal, Founder of the FealGood Foundation. “We are confident that our Senator and our friend Kirsten Gillibrand will continue to lead the charge to ensure the fragile fraternity of those effected by 9/11 and its aftermath see our Bill, the James Zadroga Health & Compensation Act permanently extended.”

“Since this act was passed, over 70,000 first responders, volunteers and area workers, many of them DC 37 members, have enrolled in the World Trade Center Health program,” said Henry Garrido, Executive Director, DC 37, AFSCME. “This program has allowed them to be monitored and treated for life-threatening diseases which they have developed, or may develop because of their brave and unselfish work at Ground Zero during and after September eleventh,” said District Council 37 Executive Director Henry Garrido. “Congress needs to act to protect the workers now.”

The James Zadroga 9/11 Health and Compensation Act passed by Congress in 2010 helped ensure proper monitoring and treatment for thousands of men, women and children that face potential life-threatening health effects due to the toxins released at Ground Zero in the aftermath of the 9/11 attacks.

The WTC Health Program continues to be a critical lifeline for many, particularly when the number of 9/11-related cancer cases among rescue workers and responders has increased over the past decade and continues to grow. Approximately 3,700 first responders have a 9/11-related cancer. Since 2012, the National Institute for Occupational Safety and Health (NIOSH) has added several types of cancers to the list of 9/11-related illnesses covered by the WTC Health Program. Studies show that 9/11 workers have gotten certain cancers – including prostate, thyroid, and multiple myeloma – at significantly higher rates than the general population.
Over 80 NYPD and over 100 FDNY personnel have reportedly died from their 9/11 illnesses since 9/11. More police officers have died from 9/11 related illnesses than perished on 9/11.

The September 11th Victim Compensation Fund (VCF), which was reopened under the Zadroga 9/11 Health and Compensation Bill, provides compensation for economic losses to 9/11 responders and survivors and their families for physical injuries as a result of involvement in Ground Zero, including breathing in toxins. Since 2013, the VCF has deemed 5,636 injured 9/11 individuals eligible for compensation.

Numerous studies have documented the health effects of the WTC attacks, which include lower and upper respiratory, gastrointestinal, and mental health conditions. These illnesses have caused major financial strains on many of those exposed who are subsequently no longer able to work and would be forced to pay the high price of health care without this federally-funded national program.

The new James Zadroga 9/11 Health and Compensation Reauthorization Act would:
Continue the World Trade Center (WTC) Health Program.  The World Trade Center Health Program administered by NIOSH would continue medical monitoring for 9/11-related illnesses for over 62,000 9/11 first responders and treatment for over 8,475 injured 9/11 survivors.  Over 33,000 responders and survivors have at least one or more medical conditions as a result of their 9/11 exposure.  Most of these conditions require chronic care. These conditions include severe respiratory diseases, chronic sinus problems, and psychological conditions such as PTSD. Over 4,385 incidences of WTC-related 9/11 cancers have been certified in program participants, including over 950 among people working for the NYC Fire Department, and more are expected.

Continue to Provide Monitoring and Treatment for Communities Throughout the Nation. The program would continue to provide medical monitoring and treatment for responders to the World Trade Center, the Pentagon and the Shanksville, PA crash site who live outside the New York metropolitan area. This legislation would continue that treatment for over 8,475 injured and ill 9/11 responders and survivors including responders who came to New York to provide assistance after 9/11 and those from New York who have moved out of the New York Metropolitan area. There are currently responders and survivors who are participating in the WTC Health Program from every state and from 429 of 435 Congressional Districts.

Continue the September 11th Victim Compensation Fund (VCF).  Under the bill the fund, which is scheduled to close on October 3, 2016, would remain open and be fully funded to provide compensation for economic damages and loss for responders and survivors who were injured by exposure to the toxins at Ground Zero. To date, the Fund has determined 11,770 claimants eligible and has made compensation decisions for 5,636 injured and ill 9/11 responders and survivors for $1.3 billion dollars in compensation. More are expected in the coming years due to the delayed onset of cancer from 9/11 exposure. But without legislation and sufficient funding, 9/11 injured responders will face having their compensation reduced by perhaps 50 percent and those who are diagnosed with cancer in future years would have NO compensation.

Make the programs permanent.  Many of the responders and survivors have chronic WTC-related illnesses requiring long-term care. Some will have delayed onset of illnesses, especially cancers, due to 9/11 exposures. They will continue to need medical care and compensation. Making the programs permanent would be similar to legislation that was enacted providing medical and compensation benefits for workers at our nuclear facilities.

Continue to New York City’s Cost Share. The City of New York would continue to contribute a 10 percent matching cost share of the total costs of the World Trade Center Health Program.

Continue to Research New Conditions. The legislation would continue research in diagnosing and treating WTC-related illnesses.

For more information about filing a claim click here.