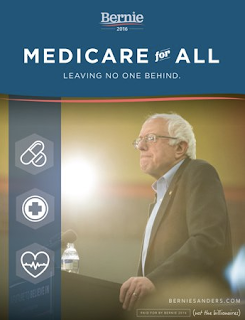 Presidential candidate Bernie Sanders has announced a plan to move forward with a Universal Medical Care program in the US. The concept will absorb the nation's ailing the medical workers' compensation delivery system into a universal care system.

“Universal health care is an idea that has been supported in the United States by Democratic presidents going back to Franklin Roosevelt and Harry Truman,” Sanders said. “It is time for our country to join every other major industrialized nation on earth and guarantee health care to all citizens as a right, not a privilege.”

The proposal would expand Medicare, the popular and successful health care program for seniors, and build on the success of the Affordable Care Act, which Sanders helped craft. Patients would be able to choose their own doctors and receive comprehensive care for everything from hospital stays to emergency room visits to primary and specialty care.

Sanders’ Medicare-for-all plan would save $6 trillion over the next 10 years compared to the current system, according to a detailed analysis by Gerald Friedman, an economist at University of Massachusetts at Amherst who is a leading expert on health care costs.

In a nation that now spends $3 trillion a year on health care – nearly $10,000 per person – Sanders’ plan would save consumers money by eliminating expensive and wasteful private health insurance. The plan would save taxpayers money by dramatically reducing overall health care costs and bringing down skyrocketing prescription drug prices which are far greater in the United States than in any other country.

The typical family earning $50,000 a year would save nearly $6,000 annually in health care costs, Friedman calculated. The average working family now pays $4,955 in premiums for private insurance and spends another $1,318 on deductibles for care that isn’t covered. Under Sanders’ plan, a family of four earning $50,000 would pay just $466 per year to the Medicare-for-all program.

Additional savings would be achieved from reducing outlays for taxpayer-supported health care expenditures.

Sanders laid out his health care plan and progressive tax reform proposals here in South Carolina where he and former Secretary of State Hillary Clinton and former Maryland Gov. Martin O’Malley were to take part on Sunday night in a nationally televised debate in their contest for the Democratic Party presidential nomination.

To read Professor Gerald Friedman’s analysis of Sanders’ plan, click here.
….
Jon L. Gelman of Wayne NJ is the author of NJ Workers’ Compensation Law (West-Thompson-Reuters) and co-author of the national treatise, Modern Workers’ Compensation Law (West-Thompson-Reuters). For over 4 decades the Law Offices of Jon L Gelman  1.973.696.7900  jon@gelmans.com  have been representing injured workers and their families who have suffered occupational accidents and illnesses.

Related articles on The Path to Federalization of workers' compensation:

Workers' Compensation: Path to Federalization: Obama May ...
Oct 17, 2014
Yesterday the US Congress passed and sent to the President, The World Trade Center Health Program, marking yet another advance on the path to federalize the nation's workers' compensation program. The Federally .

Workers' Compensation: Obamacare Will Be Collecting ...
May 17, 2013
and will put greater control and more choice in the hands of individuals and small businesses." Read more about "Federalization" and workers' compensation: Path to Federalization: A National Workers Compensation System.

Workers' Compensation: Path to Federalization: A National ...
Jul 05, 2012
United States Supreme Court has taken a giant leap forward to facilitate the Federalization of the entire nation's workers' compensation system. By it's recent decision, upholding the mandate for insurance care under the ...

National Experts Call Workers Compensation System ...
Jun 14, 2012
Yesterday the US Congress passed and sent to the President, The World Trade Center Health Program, marking yet another advance on the path to federalize the nation's workers' compensation program. The Federally .

Workers' Compensation: A Nuclear Workers' Compensation Disaster
Mar 16, 2011
Historically The Federal government's role has been to rise to the occasion and walk further down a path to federalization. On a smaller scale than the potential consequences of the Japanese debacle, the US was first in line ...

Workers' Compensation: Agenda Announced for Public ...
Feb 15, 2011
In December 2010 US Congress passed and President Obama signed, The World Trade Center Health Program, marking yet another advance on the path to federalize the nation's workers' compensation program.

Workers' Compensation: Synchronizing Federal Care for Oil Spill ...
Jul 13, 2010
As The Path To Federalization expands, this debate will expand. A recent study by the Center for American Progress addresses these concerns. "Health threats from the oil spill may linger unseen, perhaps for more than a …

Workers' Compensation: Libby Care Program Begins Enrollment ...
May 19, 2010
The “Libby Care” provisions, and its envisioned prodigies, will embrace more exposed workers, diseases and geographical locations, than any other program of the past. Potential pilot programs will now be available to ...