The Difficult Task of the Florida Supreme Court

The Florida Supreme has before it a constitutional challenge once again concerning workers’ compensation. The scope of the controversy remains undefined and the ultimate impact equally uncertain. I have found over the years that one cannot predict the outcome of a case by merely watching an oral argument. 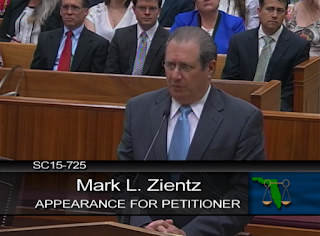 After hearing the argument this week in Stahl v Hialeah Hospital one comes away with ambiguity over the issues before the Court. Complicating the controversy is a shallow record below, which, of itself, maybe not be so important. Landmark cases have been decided on limited trial court records before.

The constitutional challenge to the century old exclusive remedy for the injured worker was bolstered by both objective and philosophical concerns. They involve many present day social/economic issues facing the United States. Over one-hundred years ago, the enactment of the European based compensation system  of workers' compensation, established an administrative system of benefits for occupational accidents. Incidentally, the Europeans have already adopted universal health care.

On the objective side of the argument the worker presented is concern on how to adapt a changing medical delivery scheme and benefit structure, i.e.. co-pays, scheduled impairment benefits and age payment limitations, to the needs of a changing employment market, ie. the shared economy. In the shared economy employment status has becomes elusive.

The employer argues that the record below lacked the constitutional challenges and supporting evidence. Also, the philosophical challenges are ill placed.  Even so, one cannot turn back the clock to an age when horseless wagons were emerging as a mode of transportation, and anesthesia and antiseptic were just ideas.

Legislative intent alters to meet changing times.  Legislatures modify laws over time to meet the new demands of society.  Courts universally struggle to interpret laws in the continually changing arena of life. It is an awesome task.

Arguments before a Supreme Court usually seem academic and theoretical. Courts attempt to rationally approach an issue in an effort to resolve a controversy that most likely will have wide application. Justices handle these matters in an organized and structured framework so that an issue can be crystallized, researched and  reviewed. That process is defined by the record below, the briefs presented by the parties and discussion at oral argument.

The Florida Supreme Court will now be reviewing those elements as it weighs the arguments and issues. It is indeed a difficult task. The impact of which may have far reaching implications on a national scale.