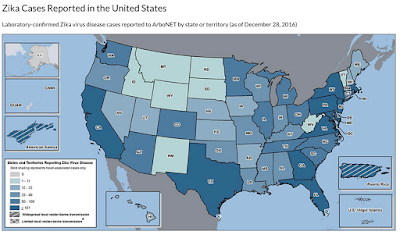 Workers' Compensation insures for the consequences of infectious diseases arising out of and in the course of employment. Is the system ready for a potential onslaught of Zika claims?

The line in the sand has been drawn in the State of Florida, where an infected Miami Beach police officer has been denied benefits. The union has actively supporting the municipal employee in an effort to rule the claim compensable.

The NJ Supreme Court in establishing compensability in an occupational disease cited Justice Learned Hand, “Few adults are not diseased … an infection mastered, though latent, is no longer a disease, industrially speaking, until the individual's resistance is again so far lowered that he succumbs.” Bober v. Independent Plating Corp., 28 N.J. 160, 145 A.2d 463 (1958).

Zika virus has been causally linked to Guillain-Barré syndrome according to a new US CDC study.

The US Centers for Disease Control (CDC) has issued an alert about the spread of Zika virus. The graphic above protects the possible scope of disease.

CDC announced that  in Florida Zika is now being spread by mosquitoes in the continental U.S. Travel restrictions have been issued for Miami-Dade County in Florida as Zika spreads to an increased area of Miami- Beach. First responders in Dade County FL (Miami Beach) are demanding workers' compensation benefits after 2 police officers contracted Zika. Local transmission of Zika has been reported in Texas.

The FDA plans to go forward with the release of millions of genetically modified mosquitos to reduce the entire mosquito population as aerial spraying in not effective.

"Employers should protect workers and workers should protect themselves from diseases spread by mosquitoes. Although most people do not become sick after a bite from an infected mosquito, some people have a mild, short-term illness or (rarely) severe or long-term illness. Severe cases of mosquito-borne diseases can cause death."

Before the battles enter the courtrooms for litigation over a host issues, including causal relationship, it would be wise to think about how employers, insurance companies and workers can be protected from the virus. Even though Congress delayed in funding prevention and treatment programs, the White House has taken the initiative  in educating the public, and transferring $600Million of unused Ebola funds to the attack on Zika. Eventually Congress enacted the Zika Response and Preparedness Appropriations Act of 2016. In December 2016, the CDC awarded $184Million ton continue the fight against Zika,