Donald Trump And The Art Of Asbestos 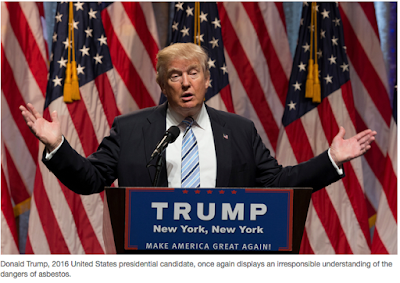 According to the Republican presidential nominee, the anti-asbestos movement is a conspiracy rigged by the mob. Yes, the mob.

For nearly five months, people around the country have been campaigning for or against Donald Trump. As one of the most polarizing presidential candidates of the century, we’ve watched debate after debate, commercial after commercial and repeatedly said, “Wow.”

There’s no doubt certain aspects of Trump’s beliefs are startling, overwhelming and offensive. But what the media shows is just one side.

Among all of Trump’s absurd ideologies, such as extreme vetting of immigrants and building a giant wall to keep them out, he also supports the use of asbestos. As a known carcinogen responsible for an estimated 10,000 American deaths a year, it’s surprising that a presidential candidate would uphold an industry that promoted its use.

But then again, is it?