Trump Administration May Bring a Surge in Occupational Disease Claims 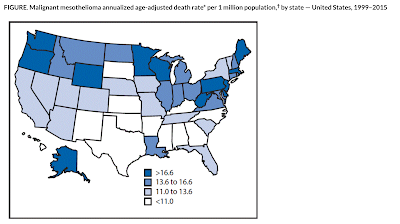 Mesothelioma death rates remain high in the US even on the eve of an anticipated national ban of the asbestos fiber. Things may radically change for the worse as the Trump Administration goes forward with its announced intention to dismantle environmental regulation now in place and placed on-track for enactment during the former Obama Administration. With anticipated less EPA and OSHA regulation under the Trump administration, there is the potential for a serious surge of future occupational disease claims in the United States.

President Trump has remarked, “I believe that the movement against asbestos was led by the mob, because it was often mob-related companies that would do the asbestos removal. Great pressure was put on politicians, and as usual, the politicians relented.” Trump, The Art of the Comeback, 1997.

The Centers for Disease Control and Prevention (CDC) today published a report indicating that mesothelioma, a neoplasm, continues to be prevalent at high rates.

Asbestos is a naturally occurring fibrous mineral which was widely used in the manufacture of a variety of products beginning in the late nineteenth century. Although the majority of exposure to asbestos occurred between 1940 and 1980, in occupations such as construction, shipyards, railroads, insulation, sheet metal, automobile repair, and other related fields, exposure continues to this day. Asbestos fibers are inhaled by workers and remain in the lungs where they can cause disease. Fibers are also inhaled by family members or any other person coming into contact with asbestos wherever it may be. We believe that the evidence shows that the companies which manufactured these products knew that their products would injure people and that they actively conspired to hide this information in order to keep selling their products, and as a result, they are now being held liable for the resulting injuries.

With the anticipated dismantling of EPA and OSHA regulations by the Trump Administration, in conjunction with a return to manufacturing jobs in the US, there remains to be seen whether there will be a resurgence of occupational disease claims and fatalities in the US,  as a result of the continued work-related exposures to such toxic substances such as asbestos.

For over 4 decades theLaw Offices of Jon L Gelman  1.973.696.7900  jon@gelmans.com  has been representing injured workers and their families who have suffered occupational accidents and illnesses.