Asbestos is a naturally occurring fibrous mineral which was widely used in the manufacture of a variety of products beginning in the late nineteenth century. Although the majority of exposure to asbestos occurred between 1940 and 1980, in occupations such as construction, shipyards, railroads, insulation, sheet metal, automobile repair, and other related fields, exposure continues to this day. 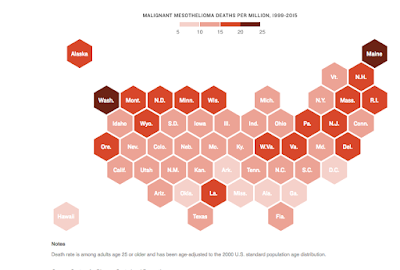 Asbestos fibers are inhaled by workers and remain in the lungs where they can cause disease. Fibers are also inhaled by family members or any other person coming into contact with asbestos wherever it may be.

A recent study predicts that there will be an increase in the number of reported mesothelioma cases in the United States in the future. Therefore the continuing epidemic of workers' compensation claims for mesothelioma will not abate as previously predicted as many exposed workers' and their families seek benefits including medical monitoring.

"Mesothelioma, a rare tumor, is highly correlated with asbestos exposure. Mesothelioma, similar to all asbestos-related diseases, is dose/intensity dependent to some degree, and studies showed the risk of mesothelioma rises with cumulative exposures. Multiple processes occur in an individual before mesothelioma occurs. The impact of mesothelioma in the United States has been continuous over the last half century, claiming between 2,000 and 3,000 lives each year.

"It is postulated that asbestos-associated mesotheliomas, in both men and women, are likely underreported. However, with the implementation of the most recent ICD-10 coding system, the correlation of mesothelioma with asbestos exposure is expected to rise to approximately 80% in the United States. This study examined the demographic and etiological nature of asbestos-related mesothelioma. Mesothelioma from asbestos exposures: Epidemiologic patterns and impact in the United States, Richard A. Lemen Journal Of Toxicology And Environmental Health, Part B Vol. 19 , Iss. 5-6,2016

The United States has yet to completely ban the use of asbestos and recent regulations to do so have been put on hold by the Trump Administration. In light of the concerns raised by this study, reconsideration of a complete ban of asbestos products in the US should be reconsidered without further delay.

For over 4 decades the Law Offices of Jon L Gelman  1.973.696.7900  jon@gelmans.com  has been representing injured workers and their families who have suffered occupational accidents and illnesses.