Looking for Order in the Land of Chaos

The NJ Appellate Division was again faced with a dispute over medical fees. This issue has engulfed the NJ Division of Workers' Compensation over the decades. New Jersey remains a member of a diminishing minority of seven jurisdictions that lack a medical fee schedule for workers' compensation claims. 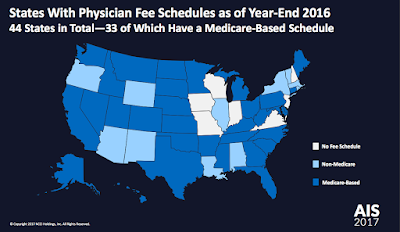 In addition to the flood of unnecessary litigation compounding an already crowded docket of workers' compensation claims, the lack of a medical fee schedule creates uncertainty for medical providers, insurance carriers, and employers. An unintended consequence is sub-standard medical care for injured workers that consequently results in unhappy employees, employers,  and a long trail of public policy issues.

Manuel Bonilla, an employee at a transportation company was injured in October 2012 when a pallet crushed him and dislocated his hip and causing a left acetabular fracture. At a Level One trauma hospital, multiple surgeries were performed. The hospital billed the insurance company for a medical fee at the 95 percentile. Payments were made at the 75 percentile.

Litigation followed and the trial judge upheld the payments at the 75 percentile rate. The hospital offered two witnesses at trial: A doctor who was not a professional fee coder; and the chief financial officer of the hospital. The insurance company presented the testimony of the vice president of a bill review company.

Since NJ does not have a medical fee schedule the court relied upon N.J.S.A. 34:15-15. "Section 15 of the Act provides, in relevant part, that “all fees and other charges for such physicians' and surgeons' treatment and hospital treatment shall be reasonable and based upon the usual fees and charges which prevail in the same community for similar physicians', surgeons' and hospital services.”


"In reaching her decision, in this case, the judge appropriately employed this process and also relied upon our decision in Coalition for Quality Health Care v. New Jersey Department of Banking and Insurance, 358 N.J. Super. 123, 128 (App. Div. 2003), where we upheld the Insurance Department's use of paid fees rather than billed fees as representing a more accurate measure of “reasonable and prevailing fees.”

"Because the judge based her determination upon the usual fees and charges that prevail in New Jersey for similar physicians' and surgeons' services, we affirm substantially for the reasons set forth in the judge's cogent and well-reasoned March 17, 2016, written decision and her subsequent written amplification. We have considered petitioner's remaining contentions and conclude they lack sufficient merit to warrant further discussion. R. 2:11–3(e)(1)(E).

NOT FOR PUBLICATION WITHOUT THE APPROVAL OF THE APPELLATE DIVISION. This opinion shall not "constitute precedent or be binding upon any court." Although it is posted on the internet, this opinion is binding only on the parties in the case and its use in other cases is limited. R.1:36-3.