Maintaining a safe workplace is a crucial strategy in the era of COVID-19. Today's guest author, Michael Gelman, MD PhD, discusses how testing can play a critical role going forward.

A lot of people are getting very excited about Michael Mina’s proposed strategy of cheap, rapid, frequent testing. From his Op-Ed in the Times, to his appearance on TWiV, to this article in the Atlantic, there’s a lot of hope around the potential for inexpensive antigen tests, like the Abbott BinaxNow - which quickly got bought up by the Department of Health and Human Services through December’s anticipated production. It’s possible that another company funded by a U.S. Government initiative might come out with something as good, or better, in the near future. (And no, I don’t have any inside information on any of this. Not that I haven’t asked around.) All this comes amid the CDC’s controversial revision of its testing guidelines, as well as a recent FDA statement that points out the unknowns around repurposing a test, which was originally developed for diagnosis, to screen large numbers of asymptomatic persons. Meanwhile, another Times article points out what many of us have known for months: that a positive PCR test late in the course of illness may be more of a hindrance than a help. 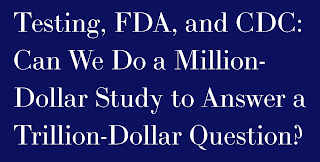 So what’s the upshot? Doctors are used to thinking of the basic characteristics of a test in terms of two values: sensitivity and specificity. Sensitivity means, if you have 100 people who really do have the disease, what percentage will be positive on your test? Specificity is the converse: if you have 100 people who really don’t have the disease, what percentage will be negative on your test? But, as Dr. Mina has pointed out, from a public health standpoint, “have the disease” should really mean “are infectious”. Right now, our best surrogate for infectiousness is viral culture, but that’s restricted to highly secure BSL-3 labs.

We need to realize that in this disease, sensitivity and specificity for infectiousness vary over the course of time. In the very early, pre-symptomatic period, which may represent a significant fraction of infectiousness, PCR may be pretty good, but it’s probably less than 100% sensitive. That’s why CDC says an early negative PCR isn’t a clean bill of health. It’s also clear that during the post-infectious period, some people can have a months-long tail of PCR positivity (in extreme cases, perhaps 4 months or more, according to a personal communication from a colleague). So late in illness, yes, PCR isn’t specific enough for being infectious.

The unanswered question about antigen tests isn’t “are they as sensitive as PCR?” We know that, taken over the whole course of illness, if you treat PCR as a gold standard, antigen tests aren’t as sensitive. But during the pre-symptomatic period, no one knows for sure if (as Dr. Mina hypothesizes) antigen is “close enough for all practical purposes,” as the old engineering joke would have it.

The most definitive way to answer that question would be to do PCR and antigen testing on a large number of asymptomatic people (ideally in a setting where there is a high risk of exposure, such as essential workers in a city experiencing a pandemic wave), send all their specimens for viral culture (as close to a gold standard as we have), then follow them forward with serial antibody levels, clinical monitoring, and maybe even more repeat testing to see who has evidence of developing COVID-19 over the ensuing week or so. Yet another example of the value of making a major investment up front to do rigorous science, get a definitive answer, and define practice.

Or we can guess based on less rigorous data and make it harder to do the right study.

Michael A. Gelman MD PhD, is the founder of Pandemic Preparedness Experts. He graduated magna cum laude from Harvard, then received his MD/PhD degrees from the Medical Scientist Training Program at the University of Wisconsin; his work there is the subject of two patents and several publications. During medical school, he also served at the CDC’s International Emerging Infections Program in Thailand, the start of a career-long interest in epidemiology, emerging infectious diseases, and pathogens with pandemic potential. He completed an Internal Medicine residency at the University of Washington Medical Center, followed by a fellowship in Infectious Diseases at Stanford.
Posted by Jon L. Gelman at Friday, September 04, 2020