US Supreme Court Will Not Review Air Ambulance Billing Issue 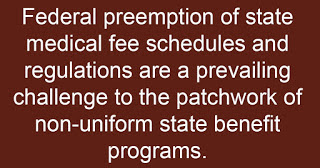 Medical benefits are a significant factor in the overall costs of most state workers' compensation programs. The ability to contain those costs is at the very heart of the viability of most workers’ compensation systems. Federal preemption of state medical fee schedules and regulations is a prevailing challenge to the patchwork of non-uniform state benefit programs.

The Airline Deregulation Act of 1978 (“ADA”) broadly preempts any state law or regulation “related to a price, route, or service of an air carrier.” 49 U.S.C. §41713(b)(1). Air-ambulance companies are federally licensed “air carriers.” Nonetheless, the Texas Workers’ Compensation Act dictates the amounts air-ambulance companies may charge and collect for air-transport services provided to individuals covered by workers’ compensation. Specifically, workers’ compensation insurers need only pay a “fair and reasonable” rate—calculated here to be 125% of the Medicare rate—and air-ambulance companies are forbidden from billing patients or their employers for the service. Given that such schemes dictate what the only party that can be charged must pay to air carriers, the Fourth, Tenth, and Eleventh Circuits have held that comparable state laws constitute impermissible rate regulation preempted by the ADA, but a divided Texas Supreme Court upheld the Texas system at issue here.

The questions presented were: