Building on his commitment to making sure that workers and employers in New Jersey are treated fairly, Governor Phil Murphy today signed a four-bill legislative package furthering state efforts to stop employee misclassification.

Misclassification is the practice of illegally and improperly classifying employees as independent contractors. This practice deprives workers of the right to earn minimum wage and overtime, workers’ compensation, unemployment, earned sick leave, job-protected family leave, temporary disability, and equal pay, and leaves them unprotected against discrimination. It also hurts the vast majority of employers who play by the rules, by putting them at a competitive disadvantage against those who flout the law. 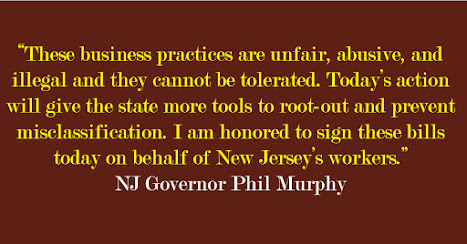 Through today’s action, a new Office of Strategic Enforcement and Compliance within the Department of Labor (DOL) will be created and DOL will create a database to track payroll projects, critical steps to tracking and eliminating misclassification. The others bills in the package will simplify the process for identifying misclassified workers and implement stop-work orders at worksites where misclassification is identified.

Tackling worker misclassification has been a priority of the Murphy Administration since day one, and these efforts build on the significant progress that already has been made. In 2018, a Department of Labor audit found more than 12,300 cases of workers being misclassified, resulting in more than $460 million in underreported gross wages and $14 million in lost state unemployment and temporary disability contributions. The audit covered just 1 percent of businesses, suggesting that the real cost of misclassification is much, much higher.

During his first year in office, Governor Murphy signed an executive order creating a Misclassification Task Force to determine the scope of the problem and propose measures to alleviate it. The Task Force was the result of a partnership between the Administration, the Legislature, and key labor and workforce stakeholders, that subsequently led to  laws stiffening penalties and providing new enforcement tools to tackle misclassification. Today’s bill signings continue this progress.

“Workers who are misclassified as independent contractors miss out on fair wages and benefits,” said Governor Phil Murphy. “These business practices are unfair, abusive, and illegal and they cannot be tolerated. Today’s action will give the state more tools to root-out and prevent misclassification. I am honored to sign these bills today on behalf of New Jersey’s workers.”

"We should all be proud that New Jersey is the best state in which to be a worker in the entire country. Because of the wages, rights and benefits New Jersey guarantees, we’re also the state whose workforce delivers the biggest value to employers,” said Labor Commissioner Robert Asaro-Angelo. "The action taken by the Governor here today will only bolster New Jersey’s workforce -- the employees who deserve the protections put in place for them – and the employers who play by the rules and properly classify their workers.”

“Employee misclassification has been a growing issue in New Jersey and I’m pleased to see further legislation signed into law that combats this abhorrent practice,” said Senator Fred Madden, chair of the Senator Labor Committee and sponsor of A-5891. “It may sound like a simple bureaucratic problem, but it is far more onerous: misclassification results in hard-working New Jerseyans being denied basic benefits such as overtime, medical leave, unemployment insurance, and safe workplaces, and their unscrupulous employers benefit. I’m confident this package of bills will go far in eradicating this practice and ensuring that our workers are treated fairly.”

“For too long, some contractors working for the state have been less than forthcoming about how they’re paying their employees,” said Senator Troy Singleton, sponsor of  A-1171. “The creation of a centrally located, publicly available, database of payroll certifications will go far to ensuring that workers are being paid proper wages when working on public contracts. That is good for the workers and taxpayers alike, and I’m pleased to see the measure now signed into law.”

“It is necessary to increase the Department of Labor's enforcement powers.  We have seen far too many violations of State wage, benefit and tax laws,” said Assemblyman Anthony Verrelli, sponsor of A-5890.  “This law will further the department’s responsibility to mitigate bad actors from misclassifying employees and lessen violations against laws previously enacted.”

“Creating a centralized office for the coordination of workforce and labor-related efforts will help ensure greater enforcement and compliance with New Jersey wage, benefit and tax laws,” Assembly sponsors of A-5891  Joseph Egan and Robert Karabinchak said in a joint statement. “This office will oversee the preliminary review of any business seeking State assistance to make sure they are complying with necessary regulations regarding employee compensation and contributions to unemployment and disability benefits funds. Ultimately, the coordination of these efforts will prove beneficial to our state, to employees, and to law-abiding businesses that deserve our assistance.”

“Misclassifying workers as independent contractors just to get out of paying insurance premiums harms hard-working people who deserve the same benefits and protections as other company employees,” said Assemblywoman Shavonda Sumter, sponsor of A-5892. “Not only will misclassification for the purpose of evading insurance premiums be a violation of our state’s Insurance Fraud Prevention Act, but this law will also provide additional resources to help streamline the identification of employee misclassification."