The claims of occupational exposures of landscapers and groundskeepers to herbicides such as Roundup were received further support by a recent decision by the California Court of Appeals. The Court affirmed the verdict of the trial court upholding the finding causal relationship between the product and cancer.

California Court of Appeals has upheld a verdict against Monsanto for non-Hodgkin’s lymphoma claim sustained due to exposure to Roundup, a glyphosate-based systemic herbicide. The Court held that the design-defect allegations were supported by admissible evidence. The decision also affirms the punitive damage award ($45 Million compensatory and $2 Billion punitive) was based upon supporting evidence and was not constitutionally excessive. The Trial Court reduced the damage awards to $87 Million. 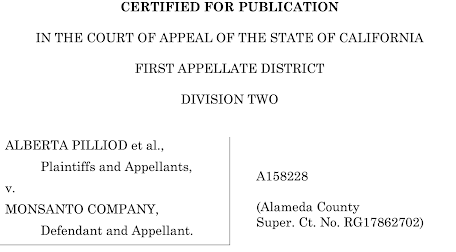 Roundup is used to kill grasses and broadleaf plants. It was approved by the US Environmental Protection Agency (EPA) in 1974. The studies that were provided initially by Monsanto were inadequate and were later found to be invalid. 1985, the EPA classified glyphosate as a possible carcinogen. In 1991, EPA re-classify glyphosate as a substance for which there is “evidence of non- carcinogenicity for humans” based on a “lack of convincing carcinogenicity inadequate studies into animal species.”

The 1991 reclassification order remained in effect through the date of the trial of the case. In 2018, 17 scientists convened by the International Agency for Research on Cancer (IARC) concluded that Roundup and glyphosate are probably carcinogenic to human beings. Their review was based upon published human cancer data, experimental animal data, and other mechanism data.

Testimony was offered that an additional product in Roundup manufactured for the US market and banned in Europe is polyethoxylated tallow amine (POEA). Evidence was offered that Dr. William Hayden’s, Monsanto’s product safety strategist wrote an email to Monsanto in 2015 “The surfactant [POEA] in the formulation. … played a role” in a tumor promotion study. Additionally, Monsanto admitted that it never conducted any long-term carcinogenicity studies on any of the formulations that it’s sold in the United States.

The Court held that the Federal Insecticide, Fungicide, and Rodenticide Act (FIRRA) 7 U.S.C. ch. 6 §136 et al. does not preempt state law. States are permitted to regulate the sale and use of pesticides and are authorized to ban their sale if the state deems the product unsafe.

It further held that the evidence presented was substantial enough to support the jury’s finding that Roundup can and did cause plaintiffs non-Hodgkin’s lymphoma.

The Appellate Court ruled that punitive damages were justified in the case:

“Summed up, the evidence shows Monsanto’s intransigent unwillingness to inform the public about the carcinogenic dangers of a product it made abundantly available at hardware stores and garden shops across the country. Monsanto knew that studies supporting the safety of Roundup were invalid when the Pilliods [Plaintiffs] began spraying Roundup in their yards, wearing no gloves or protective gear, spurred on by television commercials showing people spraying Roundup wearing shorts, and undeterred by any label or product information to suggest warning or caution. At the same time, Monsanto made ongoing efforts, in the words of the trial judge, to ‘impede, discourage or distort scientific inquiry and the resulting science about glyphosate’ in conscious disregard of public health. “

The reduced damage awards, inconclusive of punitive damages, were also upheld by the Appellate Court.

“Roundup continues to be sold without any cancer warning at hardware stores and elsewhere. Therefore, it does not appear that the punitive damages awards in Hardeman and Johnson sufficed to ‘punish and deter’ Monsanto’s conduct. (Stevens, supra, 49 Cal.App.4th at p. 1161.) In these circumstances, where reprehensible conduct remains to be punished and deterred, we do not find that a multiplier of four times the compensatory damages ‘exceeds the state’s power to punish.’ (Nickerson, supra, 63 Cal.4th at p. 375.)”

Workers’ compensation claims are considered compensation if the disease is causally related to the exposure. This case provides a judicial finding that establishes a causal relationship and as an evidentiary model in presenting scientific evidence to achieve that result.

A Potential Game-changer for Workers' Compensation 6/22/21

What are you Looking Forward to After the Pandemic? What is in your Risk Budget? 6/18/21

Jon L. Gelman of Wayne NJ is the author of NJ Workers’ Compensation Law (Thomson-Reuters) and co-author of the national treatise, Modern Workers’ Compensation Law (Thomson-Reuters). For over 4 decades the Law Offices of Jon L Gelman  1.973.696.7900  jon@gelmans.com  has been representing injured workers and their families who have suffered occupational accidents and illnesses.