As the coronavirus began to spread rapidly across the nation in March 2020, an employee of one of the world’s largest manufacturers of light, medium, and heavy-duty trucks told a supervisor of their concerns about exposure to the virus at the Denton facility.
In response, a representative of PACCAR Inc. – doing business as Peterbilt Motor Co. – told the employee that the company planned to clean workspaces and continue work as usual. After Paccar later learned the employee expressed concerns publicly about the company’s response and their concern for the safety of other employees, the company fired the employee. 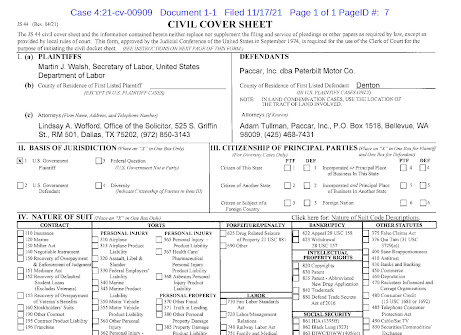 A subsequent investigation by the U.S. Department of Labor’s Occupational Safety and Health Administration found the employee engaged in protected activity by raising their workplace safety concerns, and that the company’s retaliation violated federal whistleblower protections.

On Nov. 17, the department’s Office of the Solicitor filed suit against PACCAR Inc. in the U.S. District Court for the Eastern District of Texas. In its action, the department asks the court to order the company to comply with anti-retaliation provisions in the Occupational Safety and Health Act; reinstate the employee to his former employment position with the company, pay the employee back wages, interest, compensatory and punitive damages, and other remedies; and expunge the employee’s personnel record.

“Our investigation found that PACCAR terminated a worker for reporting their concerns that the company’s response to the dangers of the coronavirus would not prevent its spread,” said Regional OSHA Administrator Eric S. Harbin in Dallas. “Every worker has the right to report safety concerns of any kind without fear of retaliation.”

“The U.S. Department of Labor will hold employers accountable when they retaliate against workers who raise safety concerns for themselves and their co-workers,” said Regional Solicitor of Labor John Rainwater in Dallas. “At the same time, the department will work vigorously to ensure a worker’s legal right to a safe and healthy workplace is protected as the law provides.”

Headquartered in Bellevue, Washington, PACCAR Inc. is one of the world’s largest manufacturers of medium- and heavy-duty trucks. It also designs and manufactures trucks under the Kenworth, Peterbilt, Leyland Trucks, and DAF brands.

Vaccine Mandate-EEOC: Employers that demonstrate “undue hardship” are not required to accommodate an employee’s request for a religious accommodation 10/20/21

COVID Boosters: What Employees and Employers Need to Know 10/14/21