The US Supreme Court [SCOTUS] has been asked to review whether the PREP Act [The Public Readiness and Emergency Preparedness (PREP) Act of 2005, 42 U.S.C. §§ 247d-6d, 247d-6e] pre-empts a claim for willful misconduct,

Does the PREP Act completely preempt state-law claims against a covered person relating to the administration or use of a covered countermeasure, such that the claims may be removed to federal court? 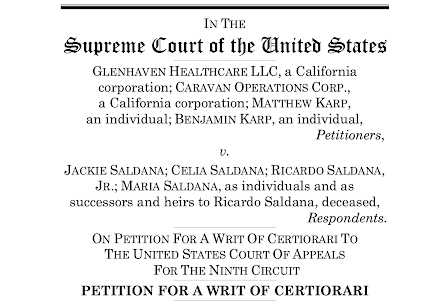 The PREP Act limits liability for those on the front lines responding to public health emergencies. Specified responders enjoy absolute immunity from suit and liability related to certain actions taken to protect public health. It was designed to create a national priority for health security and protect the public at large from infection.

The PREP Act was enacted in the early 2000s when bio-terrorism emerged wave as a threat to Americans. In 2001 there was an anthrax scare. In 2003 a SARS (severe acute respiratory syndrome) outbreak occurred. An Avian Flu scare and shortage of vaccines in the US alarmed the population.

The only exception to immunity is a claim for willful misconduct, which must be brought in a special three-judge federal district court. All other claims must be brought via a federally administered no-fault victim’s compensation fund.

Once the Secretary of Health and Hunan Services [HHS] has declared a public health emergency and specified covered countermeasures, the PREP Act’s four-pronged statutory scheme kicks in, providing: (1) immunity from suit and liability for those who administer covered countermeasures; (2) one “sole exception” to this immunity, which is an exclusive federal cause of action for willful misconduct; (3) a no-fault victim compensation fund; and (4) express preemption of all state laws inconsistent with the PREP Act.

In the Saldana case, a 77-year-old man had been living in t Glenhaven Healthcare LLC’s nursing home in California for six years when COVID-19 emerged as an infectious disease. The complaint alleges that Saldano developed Covid fever and then died of the illness. It further alleges that the nursing home did not have adequate personal protective equipment, including masks, and did not administer Covid-19 tests, whether it was staff or residents, even when it was suspected that exposure existed.

The Ninth Circuit, 27 F 4th 679 (9th Cir. 2022),  held that the PREP Act did not completely exempt state law and therefore remanded the litigation against the nursing home to the state court, where it was alleged that there was elder abuse, willful misconduct, custodial negligence, and wrongful death.

The Third Circuit, In Magliolo v. Alliance HC Holding LLC, ,16 F 4.th 393 (3d Cir. 2021), held the opposite. The Estates of nursing home residents who passed away from COVID-19 brought an action in state court against the operators of the facilities for negligence in responding to the COVID-19 outbreak at the nursing home. The case was removed to the Federal Court, and it was remanded back to the state court. Circuit Judge Porter, wrote, “The pandemic has tested our federal system, but this case confirms its resilience. The defendants invite us to assert the "judicial Power of the United States" over a matter that belongs to the states. U.S. Const. art. III. We decline that invitation. We will not exercise power that the Constitution and Congress have not given us. There is no COVID-19 exception to federalism.”

Therefore the two Circuit Courts disagree on whether the Act preempts state-law claims for willful misconduct, but they and other circuits hold that the Act does not completely preempt other state-law claims, such as negligence claims.