The National Institute for Occupational Safety and Health (NIOSH) has released a draft Intelligence Report concerning asbestos and mesothelioma in an effort to create a "road-map for research."
"Asbestos has been a highly visible issue in public health for over three decades. During the mid- to late-20th century, many advances were made in the scientific understanding of worker health effects from exposure to asbestos fibers and other elongate mineral particles (EMPs). It is now well documented that fibers of asbestos minerals, when inhaled, can cause serious diseases in exposed workers. However, many questions and areas of confusion and scientific uncertainty remain. For instance, due to the mineralogical complexity of the asbestos minerals, the scientific literature contains various inconsistencies in the definition and application of the term asbestos for health protection guidance and regulatory purposes."

"The purpose of the Roadmap is to outline a research agenda that will guide the development of specific research programs and projects that will provide a broader and clearer understanding of the important determinants of toxicity for asbestos and other EMPs. NIOSH recognizes that results from such research may impact environmental as well as occupational health policies and practices. Many of the issues that are important in the workplace are also important to communities and to the general population.Therefore, NIOSH envisions that the planning and conduct of the research will be a collaborative effort involving active participation of multiple federal agencies, including the Agency for Toxic Substances and Disease Registry (ATSDR), the Consumer Product Safety Commission (CPSC), the Environmental Protection Agency (EPA), the Mine Safety and Health Administration (MSHA), the National Institute of Environmental Health Sciences (NIEHS), the National Institute of Standards and Technology (NIST), the National Toxicology Program (NTP), the Occupational Safety and Health Administration (OSHA), and the United States Geological Survey (USGS), as well as labor, industry, academia, health and safety practitioners, and other interested parties, including international groups. This collaboration will help to focus the scope of the research, to fund and conduct research, and to develop and disseminate informational materials describing research results and their implications for establishing new occupational and public health policies." 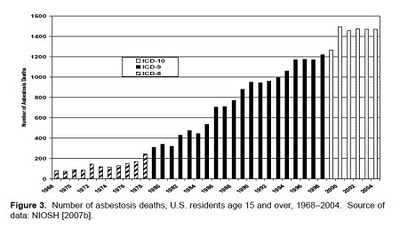 Asbestos Deaths Predicted to Continue for Decades
"NIOSH has annually tracked U.S. asbestosis deaths since 1968 and malignant  mesothelioma deaths since 1999 using death certificate data in the National Occupational  Respiratory Mortality System (NORMS). NORMS data, representing all deaths among  U.S. residents, show that asbestosis deaths increased almost 20-fold from the late 1960s  to the late 1990s (Figure 6) [NIOSH 2007b]. Asbestosis mortality trends are expected to substantially trail trends in asbestos exposures (see Section 2.4.2) for two primary  reasons: (1) the latency period between asbestos exposure and asbestosis onset is 2 typically long, commonly one or two decades or more; and (2) asbestosis is a chronic disease, so affected individuals can live for many years with the disease before succumbing. In fact, asbestosis deaths have apparently plateaued (at nearly 1,500 per year) since 2000 (Figure 3) [NIOSH 2007b]. Ultimately, it is anticipated that the annual  number of asbestosis deaths in the United States will decrease substantially as a result of  documented reductions in exposure. However, asbestos usage has not been completely  eliminated, and asbestos-containing materials remain in place in structural materials and  machinery, so the potential for exposure remains. Thus, asbestosis deaths in the United  States are anticipated to continue to occur for several decades." 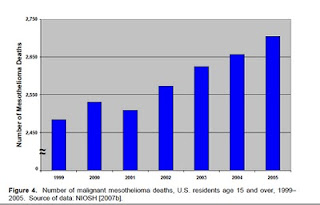 Mesothelioma Strongly Linked to Occupational Exposures
"Malignant mesothelioma, an aggressive disease that is nearly always fatal, is known to be  caused by exposure to asbestos and some other mineral fibers [IOM 2006]. The occurrence of mesothelioma has been strongly linked with occupational exposures to asbestos [Bang et al. 2006]. There had been no discrete International Classification of Disease (ICD) code for mesothelioma until its most recent 10th revision. Thus, only seven years of NORMS data are available with a specific ICD code for mesothelioma (Figure 4); during this period, there was a 9% increase in annual mesothelioma deaths, from 2,484 in 1999 to 2,704 in 2005 [NIOSH 2007b]. A later peak for mesothelioma deaths than for asbestosis deaths would be entirely expected, given the longer latency for mesothelioma [Järvholm et al. 1999]. One analysis of malignant mesothelioma incidence based on the National Cancer Institute's Surveillance, Epidemiology, and End Results (SEER) Program data found that an earlier steep increase in incidence had moderated and 1 that mesothelioma incidence may have actually peaked sometime in the 1990s in SEER-2 covered areas [Weill et al. 2004]. In contrast to NORMS data, which represents a census 3 of all deaths in the entire United States, the analyzed SEER data were from areas in 4 which a total of only about 15% of the U.S. population resides."