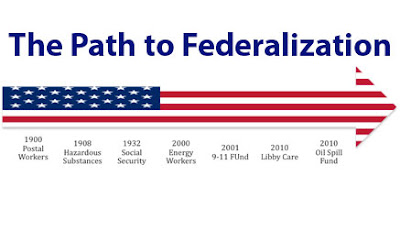 The trend toward Federalization of workers’ compensation benefits took a giant step forward by recent Presidential action creating the British Petroleum Oil Compensation Fund. While the details remain vague, the broad and sweeping concept of inclusiveness is more than obvious.
This is not a surprising turn of events. It is entirely consistent with a broad pattern to sweep the ailing and fragmented patch work of state programs into a unified Federal program. In an era of economic depression, national health care reform and major workforce changes this approach is consistent with the underlying bipartisan national philosophy.
Columnist and an expert in the field, Peter Rousemaniere, recently concluded an analysis of system’s failures that have literally pushed workers’ compensation into a federalized program. “The states and workers' compensation insurers have for decades weaseled on the promise to protect workers from occupational illnesses and to honor their claims.”
The knee jerk reaction, one would think, would be this could never happen because of interested stakeholders. In reality, they have been silently distracted by more far reaching issues and have been economically drained of resources to the point where they’ll take anything the Federal Government can offer to save them from extinction.
The Federal government is not unfamiliar with the administration and distribution of benefits. Since 1882 the federal government has been providing benefits to injured workers and their widows:  in 1900 the postal workers compensation system was established; in 1908 the Federal government established a program for those who work in hazardous environments; and, in 1932 the Social Security Administration was established. However, the Social Security Act did not embrace workers’ compensation in 1932 since the primary goal of the law was to reduce unemployment.
The federal programs have produced a dismal result over the last few years.  The Federal Victims Compensation Fund, enacted following the horrific tragedy of September 11th, 2001, has a very strict eligibility criteria and a limited recovery scheme.  The Smallpox Emergency Personnel Protection Act of 2003 (SEPPA) was enacted following an aborted vaccination program after the government reluctantly disclosed available medical research concerning potential fatal cardiovascular reactions.  A risk analysis demonstrated that this program may not have been needed at all but was merely implemented to sway public opinion.  Ultimately, the federal government halted the Smallpox Vaccination Program and funded $100 million for the purpose of cleaning up the legacy of adverse medical reactions and to ease the burden placed upon the victims and their estates that were struggling to obtain benefits under State compensation programs.
The Energy Employees Occupational Illness Compensation Program Act of 2000 (EEOICPA) (P.L.106-398) was enacted into law in October, 2000 with strong bipartisan support. EEOICPA established a program to provide compensation to employers of the Department of Energy (DOE), its contractors and subcontractors, companies that provided beryllium to DOE, and atomic weapons employers.
The Federal health care reform is a big Federal deal for workers’ compensation as it establishes the Libby Health Care Plan with far reaching impact by involving Medicare to deliver health care. The ongoing integration of conditional payments (Medicare Secondary Payer Act and mandatory reporting) as well as the review of all compromises concerning  the provision of future medical care (Workers Compensation Medical Set-aside Agreements) is already anther Federal foot in the door to prevent what in the past was a tradeoff of medical care to US taxpayer without consideration.
While federalization may not be the panacea, the target remains to limit the cost of medical expenses and provide an efficient and remedial benefit delivery system at minimal cost for administration and to hold the appropriate parties financial responsible.  The costs of maintaining duplicate medical delivery systems for workers, major medical and workers’ compensation, continues to represent an unnecessary and costly duplicate expenditures in administration and management.
The BP-Federal Oil Compensation Plan is yet another attempt to find a solution. While it may not be perfect, hopefully it will be guided successfully and will learn from past Federal trials and errors dabbling in workers’ compensation. It is obviously not the perfect solution, but that may only exist as an unattainable goal. The first step is a comprehensive and integrated Federal workers’ compensation program. A step in the right direction would be for the Federal Government to take primary responsibility for all occupational workers’ compensation claims. This would be an innovated initial approach to implement a new Federally administered Workers’ Compensation system.
To read more about federalization and workers' compensation click here.