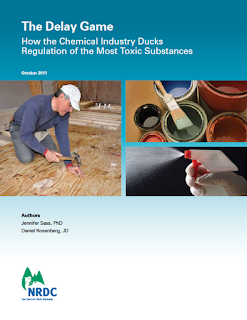 The Toxic Substances Control Act (TSCA) is in desperate need of reform. Its weaknesses have allowed chemical companies to exploit the act by thwarting the EPA's attempts to finalize health assessments and delaying regulation of chemicals -- sometimes for decades. The chemical industry's roadblocks often follow predictable patterns:
Using these tactics, the chemical industry has effectively prevented the EPA from achieving its mission to protect human health.
This report details how the U.S. legal system and TSCA itself have helped the chemical industry to be effective in its efforts to delay regulations. Congress needs to reform TSCA to make it a more effective regulatory tool. The chemical industry should not be able to endlessly postpone regulatory decisions while profiting from unregulated chemical sales until all scientific controversies and uncertainties, large and small, have been eliminated. With good public policy, the EPA should be empowered to make the best decisions it can on a timely basis using existing information, and apply new science to update its evaluations as it becomes available.
Full Report: The Chemical Industry Delay Game : How the Chemical Industry Ducks Regulation of the Most Toxic Substances. By Jennifer Sass. October 2011