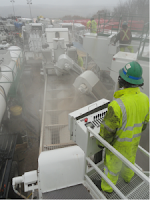 While focus has been on environmental concerns with the advent of fracking, a process to release oil and gas, a new concern has emerged over the potential occupational exposure to silica by workers who are involved in the process. The National Institute for Occupational Safety and Health has published information focusing on these safety concerns.

Silica exposure has long been recognized as a compensable occupational condition in a majority of jurisdictions. A sandblaster who was required to use several 100 pound bags of silica each day and who, as a result of the inhalation of silica dust, developed silicosis was awarded compensation benefits in the form of both disability and medical benefits. Sharp v. Paterson Monument Co., 9 N.J.Super. 476, 75 A.2d 480 (Co.1950). The increased risk for occupational exposure to tuberculosis (TB) is recognized among healthcare and other workers exposed to persons with active TB and workers exposed to silica or other agents that increase the progression from latent to active TB. CDC Proportionate Mortality from Pulmonary Tuberculosis Associated With Occupations—28 States, 1979–1990. MMWR 1995; Vol. 44/No. 1:14-19.

"Hydraulic fracturing or “fracking” is the process of injecting large volumes of water, sand, and chemicals into the ground at high pressure to break up shale formation allowing more efficient recovery of oil and gas. This form of well stimulation has been used since the late 1940s, but has increased substantially over the last 10 years with the advent of horizontal drilling technology that greatly improves access to gas deposits in shale. Approximately 435,000 workers were employed in the US oil and gas extraction industry in 2010; nearly half of those workers were employed by well servicing companies, which includes companies that conduct hydraulic fracturing (BLS)."

...
For over 3 decades the Law Offices of Jon L. Gelman 1.973.696.7900 jon@gelmans.com have been representing injured workers and their families who have suffered work related accident and injuries.