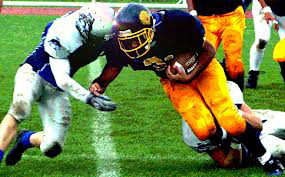 Story after story is now emerging of the tragedy of head concussions incurred during the sport of football. While the a battle is brewing over jurisdictional issues involving filing Workers’ Compensation claims in the State of California, a larger epidemic of product liability claims is now emerging against Riddell, the major manufacturer of football helmets.

One would think that workers’ compensation had some economic incentive to provide a safer workplace. Unfortunately, that is not the case.

The workers’ compensation system was crafted  as a social insurance program to provide benefits to workers who were injured in the course of their employment, and a summary and expeditious fashion.  The cost of safety was never placed into the economic equation for workers’ compensation.

The cost of workers’ compensation is theoretically to be passed upon the consumer as a cost of doing business. It is not a tool to encourage a safe workplace.

On the other hand, the civil justice system affords injured workers and their families another avenue to seek benefits by assessing punitive damages against the manufacturer suppliers and distributors of unsafe products. Unfortunately, very few jurisdictions permit claims against employers to circumvent the exclusive bar incorporated into most state workers’ compensation acts.

Perhaps, it is time to rethink the Worker’s Compensation program entirely and place it into a medical care delivery system that  really works and utilize the civil litigation system as a tool to enhance safety in the workplace to prevent future accidents from happening.
....
Jon L.Gelman of Wayne NJ, helping injured workers and their families for over 4 decades, is the author NJ Workers’ Compensation Law (West-Thompson) and co-author of the national treatise, Modern Workers’ Compensation Law (West-Thompson).

Read more about the “exclusivity bar” and Worker’s Compensation

Workers' Compensation: Exclusivity Rule Adopted in MDL Aviation ...
Jul 11, 2012
In a Multidistrict Litigation (MDL) case pending in New York, a Federal Court ruled that the New Jersey law governing exclusivity of claims barred an employee from proceeding with an intentional tort claim against the ...
http://workers-compensation.blogspot.com/
Court Rules Site of Accident Invokes Exclusivity Rule - Workers ...
Jun 13, 2012
Court Rules Site of Accident Invokes Exclusivity Rule. English: Motor vehicle accident following a ve... A NJ appeals court ruled that a motor vehicle accident cause by a co-worker in the emplyers' parking lot, before work had ...
http://workers-compensation.blogspot.com/
Workers' Compensation: Exclusivity Doctrine Shields an Employer ...
Apr 09, 2010
A Federal Judge, who is managing the Multi-District Asbestos Litigation, has ruled that the exclusivity doctrine defeats the application of the dual capacity doctrine where the manufacturer's corporation was merged into the ...
http://workers-compensation.blogspot.com/
Workers' Compensation: Willful OSHA Violation Alone Not Enough ...
Jun 27, 2012
Willful OSHA Violation Alone Not Enough Alone to Circumvent the Exclusivity Doctrine. "New Jersey's Workers' Compensation Act (the Act), N.J.S.A. 34:15-1 to -128.5, provides a prompt and efficient remedy for an employee's ...