The repeat violations, with $69,300 in fines, involve exposure to fall hazards of approximately 20 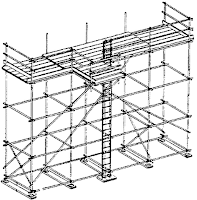 feet while working from a scaffold lacking a fall protection system; workers on a scaffold more than 10 feet above a lower level while not protected from falling to that lower level; tubular welded frames and panels not properly braced; no limited access zone established during masonry wall construction; and lack of appropriate ladders, stair towers, walkways or access to scaffold platforms more than 2 feet above or below a point of access. The same violations were cited in 2010. A repeat violation is issued when an employer previously has been cited for the same or a similar violation of a standard, regulation, rule or order at any other facility in federal enforcement states within the last five years.

The serious violations, with a $20,790 penalty, involve failing to guard the point of operation of a mortar mixer, ensure electrical equipment was properly grounded, ensure makeshift devices were not used to increase scaffold height, and to properly install toeboards on the scaffold edge. A serious citation is issued when there is substantial probability that death or serious physical harm could result and the employer knew, or should have known, of the hazard.

More information on scaffolding safeguards can be found at http://www.osha.gov/SLTC/scaffolding/index.html#recognition.

Mr. Concrete Corp. has 15 business days from receipt of the citations to comply, request an informal conference with the OSHA area director in Hasbrouck Heights, or contest the citations and proposed penalties before the independent Occupational Safety and Health Review Commission.

Under the Occupational Safety and Health Act of 1970, employers are responsible for providing safe and healthful workplaces for their employees. OSHA's role is to ensure these conditions for America's working men and women by setting and enforcing standards, and providing training, education and assistance. For more information, visit http://www.osha.gov.

Read more about OSHA and workers' compensation:
Workers' Compensation: OSHA Moves to Protect Temporary Workers
May 04, 2013
OSHA today sent a memorandum to the agency's regional administrators directing field inspectors to assess whether employers who use temporary workers are complying with their responsibilities under the Occupational ...
http://workers-compensation.blogspot.com/
Workers' Compensation: OSHA's Intent Is Not To Preempt State Tort ...
May 10, 2013
clients' failure to warn claims based on the argument that such claims are preempted by OSHA's hazard communication standard. Their argument is based on an unpublished NJ Appellate Division decision, Bass v.
http://workers-compensation.blogspot.com/
Workers' Compensation: OSHA Needs To Be Strengthened
Mar 31, 2013
If workplaces were safer then there would be no reason to have a workers' compensation program at all. OSHA, The Occupational Safety and Head Health Administration (OSHA), does just that, but its enforcement powers are ...
http://workers-compensation.blogspot.com/
OSHA Cites NJ Recycling Company for Safety Violations Following
Mar 19, 2013
OSHA inspectors found that procedures were not used to lock out the energy source of a conveyor belt system while the worker was clearing a cardboard jam, which resulted in the amputation. OSHA cited the company with a ...
http://workers-compensation.blogspot.com/
......
For over 4 decades the Law Offices of Jon L. Gelman  1.973.696.7900  jon@gelmans.com have been representing injured workers and their families who have suffered occupational accidents and illnesses.  Click here now to submit a case inquiry.