Today's post was shared by CIDRAP and comes from www.cidrap.umn.edu

Three more states are reporting Cyclospora infections, pushing the national total to 283, but it's not clear which of the newly reported cases are part of the national outbreak, the US Centers for Disease Control and Prevention (CDC) and individual states reported today.
In its update today, the CDC added Georgia, Connecticut, and New Jersey to its map of cyclosporiasis cases, which means nine states are now reporting cases. Georgia has two cases, and Connecticut and New Jersey each have one.

About half of the total cases are from Iowa, which reported its first cases in early July. In an update today the Iowa Department of Public Health (IDPH) said 134 cases have been reported in the state so far, which is seven more than reflected in the CDC total. 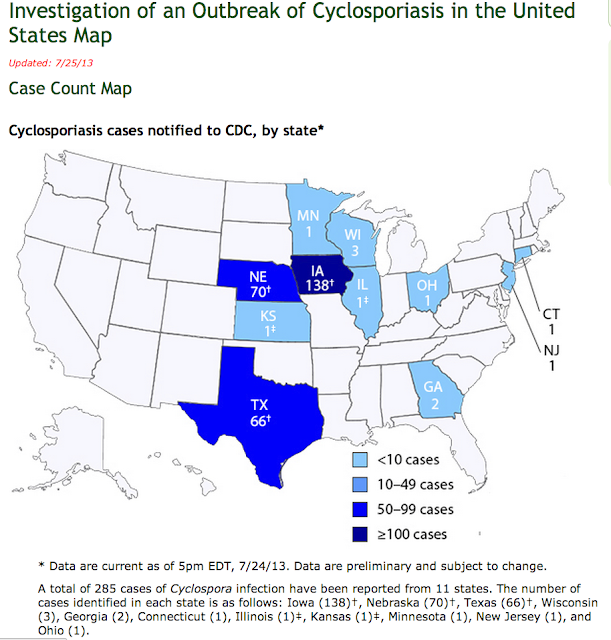 The Nebraska Department of Health and Human Services (NDHHS) also updated its case count today, adding one more case that isn't reflected in the CDC's total to bring its total to 69. The combined new cases in Iowa and Nebraska raise the total number of US cases to 283.

Texas is third in case numbers, with 65.

The CDC said totals in those three states may include some travel-associated cases and that interviews are pending. It also noted that the single cases reported from Illinois and Kansas probably involved infections acquired in neighboring outbreak states.
Wisconsin has confirmed four Cyclospora cases.

William Gerrish, director of communications for the Connecticut Department of Public Health, said both of the state's patients are...

[Click here to see the rest of this article]