The US CDC reports that deaths attributed to lack of preventive health care or timely and effective medical care can be considered avoidable. In this report, avoidable causes of death are either preventable, as in preventing cardiovascular events by addressing risk factors, or treatable, as in treating conditions once they have occurred. Although various definitions for avoidable deaths exist, studies have consistently demonstrated high rates in the United States. Cardiovascular disease is the leading cause of U.S. deaths (approximately 800,000 per year) and many of them (e.g., heart disease, stroke, and hypertensive deaths among persons aged <75 years) are potentially avoidable. 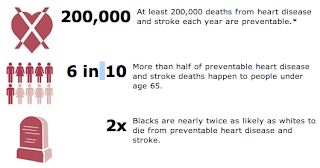 Methods: National Vital Statistics System mortality data for the period 2001–2010 were analyzed. Avoidable deaths were defined as those resulting from an underlying cause of heart disease (ischemic or chronic rheumatic), stroke, or hypertensive disease in decedents aged <75 years. Rates and trends by age, sex, race/ethnicity, and place were calculated.
Results: In 2010, an estimated 200,070 avoidable deaths from heart disease, stroke, and hypertensive disease occurred in the United States, 56% of which occurred among persons aged <65 years. The overall age-standardized death rate was 60.7 per 100,000. Rates were highest in the 65–74 years age group, among males, among non-Hispanic blacks, and in the South. During 2001–2010, the overall rate declined 29%, and rates of decline varied by age.
Conclusions: Nearly one fourth of all cardiovascular disease deaths are avoidable. These deaths disproportionately occurred among non-Hispanic blacks and residents of the South. Persons aged <65 years had lower rates than those aged 65–74 years but still accounted for a considerable share of avoidable deaths and demonstrated less improvement.
Implications for Public Health Practice: National, state, and local initiatives aimed at improving health-care systems and supporting healthy behaviors are essential to reducing avoidable heart disease, stroke, and hypertensive disease deaths. Strategies include promoting the ABCS (aspirin when appropriate, blood pressure control, cholesterol management, and smoking cessation), reducing sodium consumption, and creating healthy environments.

In the 1970s, a method for measuring the quality of medical care through identifying "untimely and unnecessary" deaths was proposed (1). This concept has since been expanded to include deaths attributed to lack of preventive health care (i.e., preventing cardiovascular events by addressing risk factors) or timely and effective medical care (i.e., treating patients who have cardiovascular conditions); these deaths are defined as avoidable (2). Although no standard method for measuring avoidable deaths exists, Canada (3), the United Kingdom (4), and the European Union (5) have introduced avoidable death measures for their surveillance systems. In several previous studies, the United States ranked higher in avoidable death rates compared with other industrialized countries (6).
Heart disease is the leading cause of death in the United States, and cardiovascular disease accounts for nearly 30% of all deaths annually (nearly 800,000 deaths) (7). Many heart disease and stroke deaths could be avoided through improvements in lifestyle behaviors, treatment of risk factors, and addressing the social determinants of health (i.e., economic and social conditions that influence the health of individuals and communities). Unhealthy lifestyle behaviors (e.g., tobacco use, inadequate physical activity, poor diet, and excessive alcohol use) coupled with uncontrolled hypertension, elevated cholesterol, and obesity account for 80% of ischemic heart disease mortality and approximately 50% of stroke mortality in high-income countries such as the United States (8). Hypertension is the single most important risk factor for stroke, and its control is essential to reducing death from stroke (8). Additional medical interventions, such as secondary prevention and evidence-based procedures to treat ischemic heart disease and stroke, have been shown to reduce deaths in the United States (9,10).
This report describes the epidemiology of avoidable deaths from heart disease, stroke, and hypertensive disease in the United States, presents trends in avoidable death rates for these causes, and documents geographic disparities by state and county.

Mortality data from the National Vital Statistics System for the period 2001–2010 were analyzed. Bridged-race July 1 population estimates produced by the U.S. Census Bureau in collaboration with the National Center for Health Statistics were compiled using intercensal estimates for the period 2001–2009 and postcensal estimates for 2010.
In this report, avoidable deaths include all deaths among persons aged <75 years with an underlying cause of ischemic heart disease (International Classification of Diseases, 10th Revision [ICD-10] codes I20–I25), cerebrovascular disease (stroke) (I60–I69), hypertensive disease (I10–I15), or chronic rheumatic heart disease (I05–I09) (2). The analyses were limited to persons aged <75 years because the life expectancy of the total U.S. population in 2010 was 78.7, and 100% of these deaths in persons aged <75 years were considered to be preventable in accordance with previous analyses (3–5). Age-standardized death rates were calculated by sex, race/ethnicity,* and the decedent's state of residence at time of death, and trends were analyzed for the period 2001–2010 using joinpoint regression to calculate the average annual percentage change (AAPC). Rate comparisons were made using rate ratios (RRs). County-level rates for combined years 2008–2010 were calculated using a spatial empirical Bayesian smoothing technique to enhance the stability of the rates (11).

In 2010, the total number of avoidable deaths from heart disease, stroke, and hypertensive disease was 200,070, and the death rate was 60.7 per 100,000 population (Table 1). Death rates in 2010 were highest in the oldest age group (65–74 years) (401.5 per 100,000) and lowest in the youngest age group (0–34 years) (1.9 per 100,000); however, 56% of the deaths (n = 112,329) occurred among those aged <65 years. Avoidable deaths were higher among males (83.7 per 100,000) than females (39.6) and blacks (107.3) compared with other races/ethnicities. Rates for blacks and American Indians/Alaska Natives were statistically significantly higher than those for whites (RR = 1.9 and 1.2, respectively), whereas rates for Hispanics and Asian/Pacific Islanders were significantly lower (RR = 0.8 and 0.6, respectively).
From 2001 to 2010, the avoidable death rate from heart disease, stroke, and hypertensive disease decreased 29%. The AAPC shows that rates decreased sharply for the 65–74 years age group (AAPC = -5.1), declined more gradually in the 55–64 years age group (AAPC = -3.3), declined minimally in the 35–54 years age group (AAPC = -0.8), and did not change in the youngest age group (Table 1). Declines occurred among both sexes and all race/ethnicity groups. Temporal trends for blacks and whites from 2001 to 2010 showed a decrease over time for all groups; however, black males consistently experienced the highest avoidable death rates throughout the period, and black females showed rates similar to white males (Figure 1).
By state, avoidable deaths from heart disease, stroke, and hypertensive disease in 2010 ranged from 36.3 to 99.6 per 100,000 population in Minnesota and the District of Columbia, respectively, a greater than two-fold difference (Table 2). All states experienced declines in rates for these avoidable causes during 2001–2010, ranging from an AAPC of -1.6 in Wyoming to an AAPC of -6.1 in New Hampshire. By county, the highest avoidable death rates in combined years 2008 to 2010 were concentrated primarily in the southern Appalachian region and much of Tennessee, Arkansas, Mississippi, Louisiana, and Oklahoma, whereas the lowest rates were located in the West, Midwest, and Northeast census regions† (Figure 2). Within states, substantial variation often occurred in the county rates, with some states experiencing a fourfold difference in death rates among counties (e.g., Colorado, Virginia, Kentucky, and Maryland).