The initial state workers’ compensation programs were enacted in 1911, which makes workmen’s compensation (as the program was known until the 1970s) the oldest social insurance program in the U.S. Over the last 100 years, workers’ compensation programs have experienced periods of reform and regression. Workers’ compensation programs have varied over time in the benefits paid to workers and the costs for employers. Figure 1 indicates that benefits per $100 of covered wages increased from 1980 (the earliest year with comparable data) to the early 1990s, declined rapidly during the 1990s, and then generally declined slowly from 2000 until 2013. Costs fluctuated very roughly in tandem with benefits: costs declined from 1980 to the mid-1980s, then increased until the early 1900s, followed by steep declines in the balances of the 1990s, followed by increases for several years in the early 2000s, and then generally declining until 2012. In recent years, both benefits and costs as a percent of payroll have been near their low points for the period since 1980.

The changes in benefits and costs per $100 of covered wages since 1980 are explained in part by the changes in state workers’ compensation statutes. The National Council on Compensation Insurance (NCCI) provides advisory ratemaking and statistical services for the workers’ compensation programs in 35 states (including the District of Columbia) (NCCI 2014, 7). The NCCI publishes an Annual Statistical Bulletin (ASB), which includes data on these 35 states plus data from all other states except those with exclusive state funds. The NCCI publishes state and countrywide data on adjustments in premium level due to several factors, including benefit change, which “refers to adjustments in premium level to account for benefit changes adopted by the various state legislatures, as well as medical fee and hospital rate changes (NCCI 2014, Exhibit 1).” Figure 2 shows the changes in statutory benefits for the five year intervals from 1959 (when the NCCI data series began) to 2013.

The declines since 1990 have been due to several factors. In some jurisdictions the weekly benefit amounts or the durations of some types of benefits have been reduced. Of particular importance to this factor are the changes in permanent partial disability (PPD) benefits, which accounted for 62.0 percent of all incurred cash benefits in 2009 (Sengupta, Baldwin, and Reno 2014, Figure 4). The adequacy of PPD benefits has been examined in several important studies. Hunt (2004) provides a comprehensive survey of the meaning of adequacy of benefits in the workers’ compensation program. The generally accepted standard is that workers’ compensation benefits should replace two-thirds of the wages lost because of the work injuries. However, Boden, Reville, and Biddle (2005) found that in the five jurisdictions they examined (California, New Mexico, Oregon, Washington, and Wisconsin) permanent partial disability benefits only replaced between 16 and 26 percent of earnings losses in the ten years after the workers’ were injured, which meant the “replacement rates do not approach the 2/3 benchmark for adequacy.” The data from California used by Boden, Reville, and Biddle involved workers injured in 1994 and subsequent changes in the PPD benefits in California have probably made the benefits even less adequate. 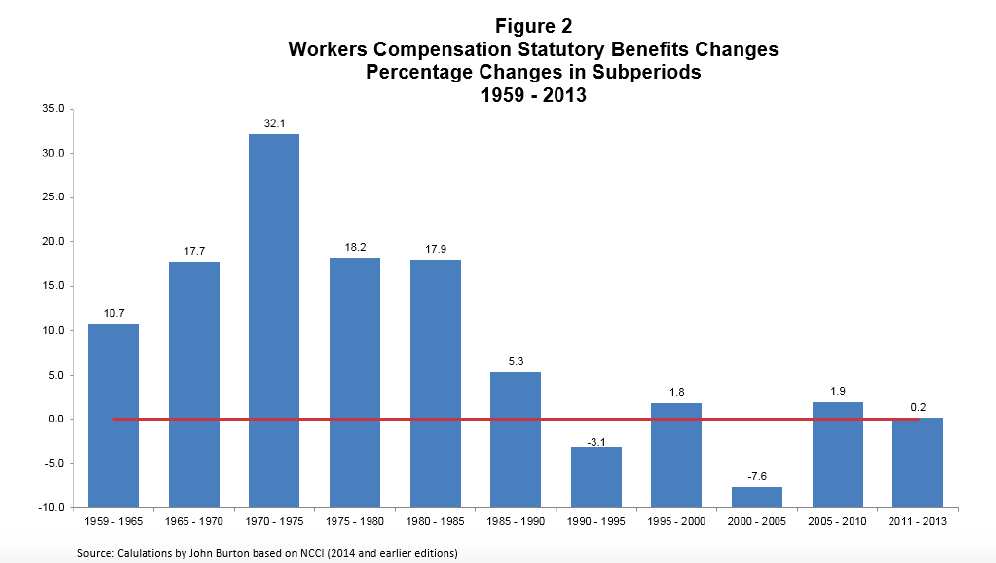 While the reductions in the statutory amounts and duration of benefits explain some of the decline in benefits since 1990 shown in Figures 1 and 2, a less obvious set of changes that limit access for disabled workers to the workers’ compensation programs may be more important (Guo and Burton 2010; Spieler and Burton 2012). These changes include limiting the compensability of claims involving particular medical diagnoses, such as stress claims; limits on coverage when the injury aggravates a pre-existing condition; and procedural and evidentiary changes, such as requiring “objective” medical evidence and imposing a stricter burden of proof on workers.

An example of the effects of restricting eligibility on workers is provided by Oregon, where Thomason and Burton (2001) estimate that a series of legislative provisions resulted in benefits (and costs) being about 25 percent below the amounts they would have been in the absence of the more restrictive eligibility standards. The legislative provisions included a requirement that the work injury be the major contributing cause (MCC) of the worker’s disability in order for the worker to be eligible for any workers’ compensation benefits. This requirement contrasts with the traditional approach in workers’ compensation in which a worker is eligible for benefits so long as the work injury is a nontrivial source of his or her disability.

One consequence of the reduction in permanent disability benefits and the tightening of eligibility standards in workers’ ‘compensation is that some disabled workers are turning to the Social Security Disability Insurance (SSDI) program for financial support. Guo and Burton (2012) examined the increase in SSDI applications between the 1980s and 1990s and found that most of the increase is applications was due to aging of the population and women’s increasing workforce participation, but that changes in state workers’ compensation programs during the 1990s resulted in a modest increase in SSDI applications during that period.

III. Workers Compensation in Illinois: Recent Developments
Illinois made several changes in its workers’ compensation statute in House Bill 1698, which was enacted in 2011. These included (1) adding a requirement that the injured worker has the burden of proof, to be shown by a preponderance of the evidence, that the worker sustained an accident arising out of and in the course of employment; (2) limitations on the choice of treating physician; (3) revisions in the medical fee schedule; (4) limitations on the awards for carpal tunnel syndrome; and (5) requiring the use of the American Medical Association Guides to the Evaluation of Permanent Impairment to determine impairment ratings for permanent partial disability benefits;.

Because most workers’ compensation statutory changes only apply to injuries that occur after the effective date of the act and because cases with serious injuries often take years to resolve, the effects of House Bill 1698 are still working their way through the system. The National Council on Compensation Insurance (NCCI 2014, Exhibit 2) estimated the effect of HB 1698 would reduce workers’ compensation premiums by 8.8 percent on September 1, 2011 (the effective date of the bill). Subsequently, the NCCI calculated that experience with the Illinois law warranted a 3.7 percent increase in premiums as of January 1, 2012 (shortly after the law went into effect), followed by 5.1 percent and 6.0 percent declines in premiums due to the experience with the Illinois law on January 1 of 2013 and 2014.

The causation standard should be raised from an “any cause” standard to a “major contributing cause” standard. The accident at work must be more than 50% responsible for the injury compared to all other causes.

The Governor’s discussion of this proposed standard indicates that several states have recently passed laws requiring the workplace to be” the primary cause for workers’ compensation to be compensable,” and indicates that “Florida’s major contributing cause standard is identical to the one we are proposing.”

The Governor’s history of the major contributing cause (MDD) standard is truncated. The MCC requirement was introduced into the Oregon workers’ compensation statute in 1993. Thomason and Burton (2001) estimates that a series of legislative provisions (including the MCC provision) resulted in Oregon benefits (and costs) being about 25 percent below the amounts they would have been in the absence of the more restrictive eligibility standard. The purpose of Governor Rauner’s proposal is to improve the competitive environment in Illinois by reducing workers’ compensation costs, but this can only accomplished by reducing benefits paid to injured workers.

While this case established a clear limitation on the exclusive remedy provision in Oregon, similar constitutional challenges in other states have not all been successful3. Nonetheless, adoption of the MCC provision in Illinois may lead to a challenge that this provision violates the state constitution and arguably also the U.S. Constitution.4

The challenge to the dual denial of both workers’ compensation and tort remedies does not depend on a constitutional challenge. A recent Pennsylvania Supreme Court decision, Tooey v. AK Steel Corp., 81 A.3d 851 (Pa. 2013), considered the statute of repose, which requires a disease to manifest within 300 weeks of the last exposure to the source of the disease.5 Two workers, Tooey and Landis, were exposed to asbestos and developed mesothelioma, but their last exposures were 1,300 and 780 weeks before the manifestation of their diseases. Because the claims did not meet the 300 week manifestation rule, they did not qualify for workers’ compensation benefits. As a result, the workers’ brought tort actions against their employers, who invoked the exclusivity provision of the Pennsylvania workers’ compensation act. The lower courts dismissed the cases, but the Supreme Court reversed the decision based on statutory construction:

It is inconceivable that the Legislature, in enacting a statute specifically designed to benefit employees, intended to leave a certain class of employees who had suffered the most serious of work-related injuries without any redress under the Act or at common law.

By basing the decision on the statutory construction of the Pennsylvania workers’ compensation law, the Supreme Court avoided having to deal with constitutional challenges to the dual denial doctrine that were raised in the case.

The essence of this brief excursion into challenges to the dual denial doctrine is that there is in my opinion a significant risk that the adoption of this approach in Illinois will result in challenges to the exclusive remedy provision that will make Illinois employers susceptible to tort suits for work injuries that are no longer eligible for workers’ compensation benefits.6 This surely qualifies as an unintended consequence of the effort to make Illinois “more competitive in order to increase jobs and grow the economy.”

IV. Conclusions
Illinois made several significant changes in the state’s workers’ compensation program in 2011 which appear to be having their intended effect of lowering the benefits paid to workers and the costs to employers. As a result, the 2011 changes appear to have improved the competitive environment in the state.

Endnotes
1 “SSDI benefits are paid only to workers who have long-term impairments that preclude gainful employment in the labor market for which the worker is suited by virtue of training or experience.” (Sengupta, Baldwin, and Reno (2014, 45)).
2 Burton (2014) discusses the various measures of profitability for the workers’ compensation insurance industry.
3 A successful challenge was Automated Conveyor Sys. V. Hill, 362 Ark. 215 (2005), in which the Arkansas Supreme Court stated that disallowing a tort suit for injuries not expressly covered by the workers’ compensation act “is not in line with its stated purpose and, in addition, would contravene . . . the Arkansas Constitution.” An unsuccessful constitutional challenges to the dual denial doctrine In Kentucky is discussed in Willborn et al. (2012, 901.)
4 The basis for a challenge to the dual denial doctrine under the U.S. Constitution is provided in Willborn et al. (2012, 901-902).
5 This discussion of Tooey is largely based on Torrey (2014).
6 There is another constitutional issue involving workers’ compensation reductions in benefits and tightening of eligibility rules that is currently being litigated. What if a worker still qualifies for some benefits under a new state law but those benefits are substantially less than the worker was entitled to under the state’s previous workers’ compensation law or that the worker would be entitled to under a workers’ compensation statute with adequate benefits? Can the state still deny the worker the right to bring a tort suit against the employer? Florida Judge Jorge Cueto said no in Florida Workers’ Advocates v. State of Florida (generally referred to as the Padgett case) (Fla. 11th Cir. Ct., 2014). The case was reheard by the 11th circuit en banc on March 30, 2015 and a decision is pending.
[Statement for Illinois Legislature 2015 V03]