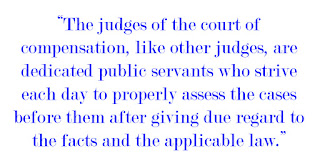 In a case involving extra-jurisdictional workers' compensation issues, where the courts below dismiss the matters for lack of jurisdiction, a NJ Appellate Court in affirming the decisions below, made the following comments concerning a brief filed with the Appellate Division.

“…..we would be remiss if we did not comment on AAM's and SJC's counsels' briefs that accused the two judges of either abusing their authority or rendering incoherent or preposterous decisions. We view these pejorative attacks on the judges to be totally unwarranted and disrespectful. The judges of the court of compensation, like other judges, are dedicated public servants who strive each day to properly assess the cases before them after giving due regard to the facts and the applicable law. Most times, as here, they render legally correct decisions. Other times, lawyers and appellate courts might disagree with them, or they might have made a mistake, but that does not render their thoughtful consideration of the case to be in any manner an abuse of their power, preposterous or incoherent. Such characterizations do little to advance a client's position and unjustifiably undermines the public's confidence in the judiciary. We hope that in the future counsel will think twice before resorting to such attacks.”

The Second Time Around: The Complexity of SARS-CoV-2 Reinfection 8/29/20