The Acting Secretary of Homeland Security has issued a National Terrorism Advisory System (NTAS) Bulletin due to a heightened threat environment across the United States, which DHS believes will persist in the weeks following the successful Presidential Inauguration.  Information suggests that some ideologically-motivated violent extremists with objections to the exercise of governmental authority and the presidential transition and other perceived grievances fueled by false narratives could continue to mobilize to incite or commit violence. 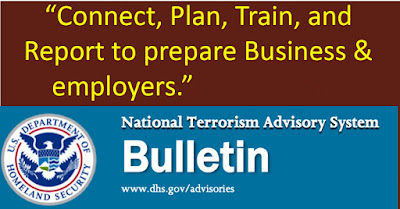 While the workers’ compensation was never crafted as a remedy for terrorism, the tragedy of September 11, 2001, is a significant challenge for the social insurance system. “Terrorism represents a new class of hazard not previously anticipated by the Workers' Compensation system in New Jersey as well as other jurisdictions. The system faces a potential of almost limitless medical costs and permanency or dependency claims in an almost unpredictable fashion with an endless and expanding perimeter of liability.” Gelman, Jon L, Workers’ Compensation Law, 38 NJPRAC 8.14 (Thomson-Reuters 2021). These events challenged the viability of the entire process.

The new alert describes the threat now facing the nation.

•    Throughout 2020, Domestic Violent Extremists (DVEs) targeted individuals with opposing views engaged in First Amendment-protected, non-violent protest activity.  DVEs motivated by a range of issues, including anger over COVID-19 restrictions, the 2020 election results, and police use of force have plotted and on occasion carried out attacks against government facilities.

•    DHS is concerned these same drivers to violence will remain through early 2021 and some DVEs may be emboldened by the January 6, 2021 breach of the U.S. Capitol Building in Washington, D.C. to target elected officials and government facilities.

•    Threats of violence against critical infrastructure, including the electric, telecommunications and healthcare sectors, increased in 2020 with violent extremists citing misinformation and conspiracy theories about COVID-19 for their actions.

•    DHS, as well as other Federal agencies and law enforcement partners will continue to take precautions to protect people and infrastructure across the United States.

•    DHS remains committed to preventing violence and threats meant to intimidate or coerce specific populations on the basis of their religion, race, ethnicity, identity, or political views.

The next few weeks may pose a significant challenge for the nation’s compensation program. Preparation is essential, especially in light of the increased prevalence of COVID-19 and the newly emergent variants. The national Biden-Harris wartime endeavor to expand production and manufacturing will increase the need to keep the workers’ compensation solvent, efficient and functioning.

BE PREPARED
Avoiding large crowds, protests, is safest due to ongoing pandemic conditions. However, if taking part in protests do so peacefully, safely, and wear masks.

Be responsible for your personal safety. Make note of your surroundings and security personnel. Carry emergency contact as well as medical and other needs information with you.