The Exclusivity Rule Is Not A Bar to a Discrimination Action

The New Jersey Supreme Court ruled that an employer could be liable under both the Law Against Discrimination Act [LAD] and the Worker's Compensation Act (WCA). Court reasoned that the dual remedies can work in harmony as they are both statutory claims. The Court noted that the common law remedies of the LADs are not prohibited by the WCA since they are statutory in nature. By allowing both claims to go forward, a worker is not limited to the statutory caps for recovery under the Worker's Compensation Act.

Plaintiff Mary Richter, a longtime type 1 diabetic, and teacher experienced a hypoglycemic event in a classroom. She sustained serious and permanent life-altering injuries. Richter pursued through this action a claim under the Law Against Discrimination (LAD), alleging that her employer failed to accommodate her pre-existing disability. 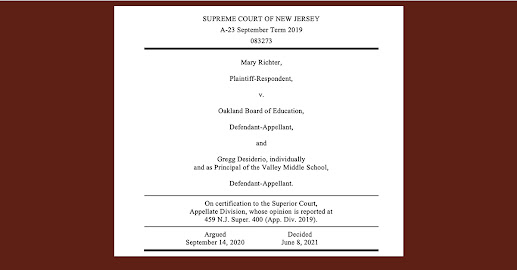 Richter was a science teacher employed by defendant Oakland Board of Education. At the start of the 2012-2013 school year, Richter received her schedule for the first marking period and learned that her lunch was scheduled for 1:05 p.m.

Believing that would negatively affect her blood sugar levels, Richter asked defendant Gregg Desiderio, the principal of the school where she taught, to adjust her schedule so she could eat lunch during the period beginning at 11:31 a.m. Desiderio told Richter he would “look into it.” Further communications were exchanged about the requested accommodation; in the end, no change was made, and Richter attended to her cafeteria duties and ingested glucose tablets to maintain her blood sugar levels. The adjustment was made during the second marking period; however, a similar scheduling issue arose during the third marking period.

On March 5, 2013, near the end of the period before her lunch, Richter suffered a hypoglycemic event in front of her students. She had a seizure, lost consciousness, and struck her head on a lab table and the floor, causing extensive bleeding. Richter was transported to a hospital for treatment. Prior to that, she had never passed out at work.

Richter filed a workers’ compensation claim for the work-related injuries; she recovered for her medical bills and for disability benefits. In March 2015, Richter filed this action rooted in the LAD for failure to accommodate her diabetic condition.

Defendants moved for partial summary judgment on the basis that Richter’s bodily injury claim was barred by the exclusive remedy provision of the WCA. The motion judge held that under the WCA’s intentional wrong exception, Richter’s bodily injury claim was not barred. Defendants moved for summary judgment again, alleging that Richter failed to establish a prima facie failure-to-accommodate claim under the LAD because she suffered no adverse employment action. A different motion judge granted the defendants’ motion for summary judgment.

The Appellate Division reversed the grant of summary judgment in favor of the defendants. 459 N.J. Super. 400, 412-13 (App. Div. 2019). The Court granted defendants’ petition for certification, limited to “whether an employee alleging discrimination for failure to accommodate a disability, pursuant to the [LAD], is required to show an adverse employment action; and whether plaintiff’s claim is barred by the exclusive remedy provision of the [WCA].” 240 N.J. 58 (2019).

HELD: An adverse employment action is not a required element for a failure-to-accommodate claim under the LAD. Further, the plaintiff’s LAD claim based on the defendants’ alleged failure to accommodate her pre-existing diabetic condition is not barred by the WCA, and the plaintiff need not filter her claim through the required showings of the “intentional wrong exception.”

1. Although the LAD does not explicitly address a reasonable accommodation requirement or claim, New Jersey courts have uniformly held that the LAD nevertheless requires an employer to reasonably accommodate an employee’s disability. That requirement was codified at N.J.A.C. 13:13-2.5(b) in 1985. Under that regulation, unless it would impose an undue hardship on the operation of the business, an employer must make a reasonable accommodation to the limitations of an employee who is a person with a disability. The identification of the elements of the failure-to-accommodate claim developed in decisions issued by trial and Appellate Division courts. Those courts identified adverse employment consequence as one element of the prima facie case for disability discrimination, in part because the factual setting of each case included an adverse job consequence. (pp. 16-18)

3. Many federal courts have recited the elements of a failure to accommodate claim under the Americans with Disabilities Act without mention of a required adverse employment action, as the Court did for claims under the LAD in Royster and Caraballo. And in at least two federal cases, a plaintiff’s failure-to-accommodate claim was permitted to proceed when no adverse employment action occurred. (pp. 21-25)

5. The Court next turns to whether Richter’s failure-to-accommodate claim is barred by the WCA’s exclusive remedy provision. The parties’ positions pit against one another two statutory schemes -- the LAD and the WCA -- both of which are remedial in nature. Enacted in 1911, the WCA was a historic trade-off whereby employees relinquished their right to pursue common-law remedies in exchange for automatic entitlement to certain, but reduced, benefits whenever they suffered injuries by accident arising out of and in the course of employment. The WCA has an exclusivity requirement and a limited “intentional wrong” exception whereby, “[i]f an injury or death is compensable under this article, a person shall not be liable to anyone at common law or otherwise on account of such injury or death for any act or omission occurring while such person was in the same employ as the person injured or killed, except for intentional wrong.” N.J.S.A. 34:15-8. The LAD’s worthy purpose is no less than the eradication of the cancer of discrimination in our society, and the LAD is given a liberal construction.

This appeal focuses on the LAD’s damages provision. In 1990, the Legislature amended the LAD to provide for a right to a jury trial and punitive damages. And N.J.S.A. 10:5-13 was amended to add common law remedies for a LAD statutory violation: “All remedies available in common law tort actions shall be available to prevailing plaintiffs. These remedies are in addition to any provided by this act or any other statute.” The legislative history of the 1990 amendments makes clear that the Legislature’s intent was to reinforce that the LAD supplements the common law. (pp. 29-38)

6. An overriding principle of statutory construction compels that every effort be made to harmonize legislative schemes enacted by the Legislature. The Court reviews cases in which it harmonized the LAD with other statutes when conflicts were perceived. The WCA was in place when the LAD was enacted, and the Legislature certainly would have been aware of the WCA when, in 1990, it added the common law remedies to the LAD and directed that the LAD supplement those remedies. In Schmidt v. Smith, the Appellate Division relied in part on those 1990 amendments in concluding that the WCA was not the exclusive means for managing sexual harassment in the workplace and that an LAD action could be pursued notwithstanding the WCA. 294 N.J. Super. 569, 585-86 (App. Div. 1996), aff’d, 155 N.J. 44 (1998). The Court now makes express Schmidt’s import, holding that the WCA’s exclusive remedy provision does not attach to Richter’s LAD claim. Each statute operates to fulfill different purposes, both protective of workers in the workplace. The statutes can function cumulatively and complementarily; they are not in tension, much less in conflict, as the Court illustrates by reviewing the facts of the present case. The two statutory schemes, harmonized, operate to prevent double recovery. With double recovery averted, there is no possible conflict. Thus, the full- throated pursuit of remedies available under the LAD for actionable disability discrimination may proceed unencumbered by the WCA exclusivity bar. (pp. 39-47)

7. The WCA provides a workers’ compensation lien for an employer under N.J.S.A. 34:15-40. The Appellate Division reviewed that provision’s operation and instructed on how, if a jury awards damages to Richter on remand, the employer may obtain reimbursement for workers’ compensation benefits paid. 459 N.J. Super. at 423-26. The Court reviews those instructions and agrees with the Appellate Division’s direction on this matter, rejecting the defendants’ argument claiming a right to “100% reimbursement.” The Court also affirms the Appellate Division’s holding that the jury may not be presented with evidence of Richter’s medical expenses and lost wages. (pp. 47-48).

Jon L. Gelman of Wayne NJ is the author of NJ Workers’ Compensation Law (Thomson-Reuters) and co-author of the national treatise, Modern Workers’ Compensation Law (Thomson-Reuters). For over 4 decades the Law Offices of Jon L Gelman  1.973.696.7900  jon@gelmans.com  has been representing injured workers and their families who have suffered occupational accidents and illnesses.