One of the remedies available to injured workers who have been discharged in retaliation for filing a workers’ compensation claim is a common law action. The failure to adequately plead a retaliation action in the complaint will result in the dismissal of the action.

A 63-year-old female employee was physically assaulted by a male co-worker while waiting to push out of work. The injured worker was. She was employed for 20 years as a line worker in a window manufacturing factory; she had no negative performance reviews. 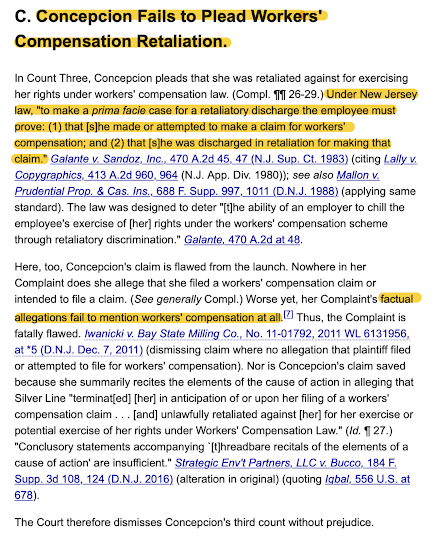 The assault occurred when the male worker, employed for three years with the company,  grabbed her arm and called her a “fresh old woman.” The woman yelled, and he released her, and she suffered injuries to her neck, shoulder, and back, including multiple disc herniations. Complaints filed with Human Resources of the Copland resulted in the injured worker being discharged and terminated.

Specifically focussing on the workers’ compensation discrimination cost, the court found the complaint fatally flawed. Two elements must be proven to adequately plead a. common law action for discharge for retaliatory discrimination flowing from a workers’ compensation claim. First, the employee must have made or attempted to claim benefits under the NJ Workers’ Compensation Act. Second, the employee was discharged for making a claim.

The court held that neither of the above elements was alleged, and the complaint filed in Federal Court did not mention workers’ compensation law.