The Bureau of Justice Statistics (BJS), the Bureau of Labor Statistics (BLS) and the National Institute for Occupational Safety and Health (NIOSH) released Indicators of Workplace Violence, 2019, which provides findings on fatal and nonfatal crimes that occurred in the workplace or away from work but over work-related issues. Findings are presented for 13 indicators of workplace violence, using data from five federal data collections. 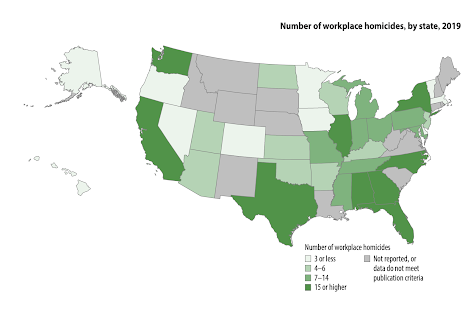 According to the study, an annual average of 1.3 million nonfatal workplace violent victimizations occurred during the combined 5 years from 2015 to 2019, based on data from BJS’s National Crime Victimization Survey (NCVS). Violent victimizations include rape or sexual assault, robbery, aggravated assault and simple assault. This was a rate of 8.0 nonfatal violent crimes per 1,000 workers age 16 or older. Persons in corrections occupations had the highest average annual rate of nonfatal workplace violence at 149.1 per 1,000 workers among all occupations measured.

The joint study also stated that about 529,000 nonfatal injuries from workplace violence were treated in hospital emergency departments (EDs) for the combined 2015-19 period, based on data from NIOSH’s National Electronic Injury Surveillance System-Occupational Supplement. This was a rate of 7.1 ED-treated injuries per 10,000 full-time equivalent (FTE) workers. Physical assaults (hitting, kicking or beating) accounted for 83% of such injuries, which were most often contusions and abrasions (33%), followed by sprains and strains (12%) and traumatic brain injuries (12%). ED-treated injuries were more common among younger victims than older victims.

Indicators of Workplace Violence, 2019 (NCJ 250748; NIOSH 2022-124) was written by Erika Harrell of BJS; Lynn Langton, formerly of BJS; Jeremy Petosa of BLS; Stephen M. Pegula and Mark Zak, formerly of BLS; and Susan Derk, Dan Hartley and Audrey Reichard of NIOSH. The report and related documents are available at bjs.ojp.gov.

The Bureau of Labor Statistics of the U.S. Department of Labor measures labor market activity, working conditions, price changes and productivity in the U.S. economy to support public and private decision-making. William W. Beach is the commissioner. Additional information about BLS is available at https://www.bls.gov.

The National Institute for Occupational Safety and Health, part of the U.S. Centers for Disease Control and Prevention in the U.S. Department of Health and Human Services, is a research institute focused on the study of worker safety and health and empowering employers and workers to create safe and healthy workplaces. John Howard, MD, is the director. Information about NIOSH is available at https://www.cdc.gov/niosh/index.htm.

The Bureau of Justice Statistics of the U.S. Department of Justice is the principal federal agency responsible for collecting, analyzing, and disseminating reliable statistics on crime and criminal justice in the United States. Doris J. James is the acting director. Additional information about BJS’s statistical publications and programs are available at bjs.ojp.gov/.

The Office of Justice Programs provides federal leadership, grants, training, technical assistance, and other resources to improve the nation’s capacity to prevent and reduce crime, advance racial equity in the administration of justice, assist victims and enhance the rule of law. More information about OJP and its components can be found at www.ojp.gov.