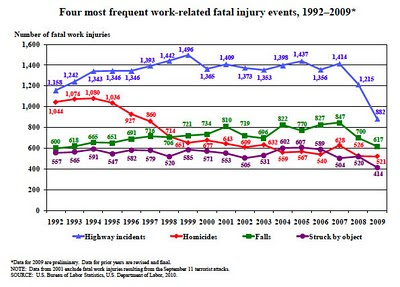 A preliminary total of 4,340 fatal work injuries were recorded in the United States in 2009, down from a final count of 5,214 fatal work injuries in 2008. The 2009 total represents the smallest annual preliminary total since the Census of Fatal Occupational Injuries (CFOI) program was first conducted in 1992. Based on this preliminary count, the rate of fatal work injury for U.S. workers in 2009 was 3.3 per 100,000 full-time equivalent (FTE) workers, down from a final rate of 3.7 in 2008. Counts and rates are likely to increase with the release of final 2009 CFOI results in April 2011. Over the last 2 years, increases in the published counts based on information received after the publication of preliminary results have averaged 156 fatalities per year or about 3 percent of the revised totals.

Economic factors played a major role in the fatal work injury decrease in 2009. Total hours worked fell by 6 percent in 2009 following a 1 percent decline in 2008, and some industries that have historically accounted for a significant share of fatal work injuries, such as construction, experienced even larger declines in employment or hours worked. In addition, some source documents used by CFOI State partners to identify and verify fatal work injuries were delayed, due at least in part to fiscal constraints at some of the governmental agencies who regularly provide source documentation for the program.

The BLS fatality figures are the fatalities from injuries that occurred at the worksite or shortly thereafter, and do not include occupational illness fatalities, the latter primarily from toxic chemical exposures in the workplace.

Worker deaths from toxic exposures, other work illnesses are conservatively estimated by NIOSH, Steenland, Markowitrz, and other researchers at 50,00 to 60,000 deaths each year, or ten times the number of fatalities from work injuries. It is a disaster of monumental proportions that goes largely unrecorded. The United States has no comprehensive occupational health data collection system.