Plaintiff Elmer Branch brought a putative class action against his employer, defendant Cream-O-Land Dairy, on behalf of himself and similarly situated truck drivers employed by defendant, for payment of overtime wages pursuant to the New Jersey Wage and Hour Law (WHL). In this appeal, the Court considers whether defendant could assert a defense to the action under N.J.S.A. 34:11-56a25.2 based on its good-faith reliance on certain determinations by employees of the Department of Labor and Workforce Development (Department) that defendant is a “trucking industry employer.”
Subject to exceptions enumerated in the statute, the WHL provides that an employer shall “pay each employee not less than 1 1⁄2 times such employee’s regular hourly rate for each hour of” overtime. N.J.S.A. 34:11-56a4(b)(1). The WHL, however, creates an exemption from that overtime compensation requirement for employees of a “trucking industry employer.” N.J.S.A. 34:11-56a4(f). For such employees, the WHL provides for “an overtime rate not less than 1 1⁄2 times the minimum wage.” Ibid. 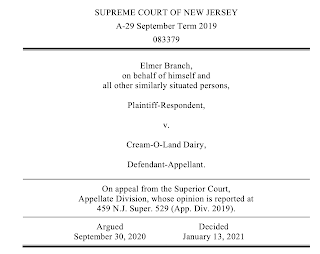 Jon L. Gelman of Wayne NJ is the author of NJ Workers’ Compensation Law (West-Thomson-Reuters) and co-author of the national treatise, Modern Workers’ Compensation Law (West-Thomson-Reuters). For over 4 decades the Law Offices of Jon L Gelman 1.973.696.7900 jon@gelmans.com has been representing injured workers and their families who have suffered occupational accidents and illnesses.