The proposed class action settlement in the Bayer Roundup Products Liability Litigation has been rejected by a Federal District Court overseeing the Multi District Litigation (MDL). The Court concluded that the potential future claims group, those who have not yet been diagnosed with Non-Hodgins Lymphoma (NHL) but used Roundup before February 2021, was unreasonable. Bayer purchased Roundup from Monsanto.
The herbicide Roundup is used by many commercial landscapers on residential and commercial properties, including golf courses. The chemical is applied as a  liquid spray. 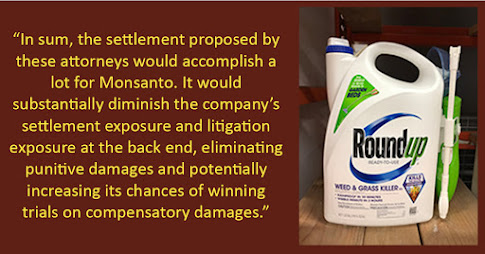 In holding that the proposed futures settlement was unreasonable, the Federal District Court Judge reasoned that the medical monitoring proposal of 4 years did not apply to NHL as the disease has a long latency period. No test would reveal the medical condition before the usual manifestation age of 65 years of age.
While those opting to accept the proposed settlement would retain the right to sue Monsanto, the class members would forfeit their right to claim punitive damages. Additionally, the settling class members would be required to stipulate to the admission of the opinion of a seven-member science panel as to the causal relationship of Roundup with NHL.
Bayer continues to sell Roundup without a significant warning label regarding the safety of glyphosate, the alleged carcinogen. The Court suggested that that mere California “Proposition 65” warning label was misleading, and an EPA-approved warning label should be utilized.
The Court reflected that there was no need to rush the proposed settlement as Bayer was “a massively wealthy company, and it continues to make money specifically from Roundup sales.” Future claimants, it concluded, would not lose the opportunity to obtain recovery through litigation as the solvency of Bayer is not an issue.
The proposed science panel that Bayer wished to rely upon the Court observed was an attempt by the company to salvage a valid defense as Bayer has already lost “the battle of the experts” in three substantial trials. The proposed “court-blessed” science panel would result in diminished future recoveries in litigation.
The judge concluded, “In sum, the settlement proposed by these attorneys would accomplish a lot for Monsanto. It would substantially diminish the company’s settlement exposure and litigation exposure at the back end, eliminating punitive damages and potentially increasing its chances of winning trials on compensatory damages. It would accomplish far less for the Roundup users who have not been diagnosed with NHL—and not nearly as much as the attorneys pushing this deal contend.”
In re Roundup Products Liability Litigation, MDL No. 2741, Case No. 16-md-02741-VC (USDCT No. District California, May 26, 2020. (Ramirez, et al. v. Monsanto Co., Case No. 3:19-cv-02224)
Roundup Litigation articles:
Verdict: $2 Billion -- Herbicide Occupational Exposures - The Next Wave of Serious Compensation Claims, May13, 2019.
A Surge in Groundskeeper/Landscaper Cancer Claims Foreseeable, April 5, 2019.

….
Jon L. Gelman of Wayne NJ is the author of NJ Workers’ Compensation Law (Thomson-Reuters) and co-author of the national treatise, Modern Workers’ Compensation Law (Thomson-Reuters). For over 4 decades the Law Offices of Jon L Gelman 1.973.696.7900 jon@gelmans.com has been representing injured workers and their families who have suffered occupational accidents and illnesses.