The 9th Circuit Court of Appeals held that the  Environmental Protection Agency must reevaluate glyphosate, a weedkiller used in Roundup. The court determined that the chemical poses a serious health hazard and is likely to cause human cancer.

The herbicide chemical is used by landscapers and in the agricultural sector. Exposure is alleged to those who come in contact with it on golf courses, farms, roadsides, and homes. 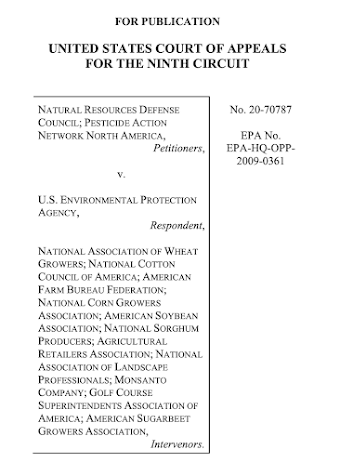 The Federal Insecticide, Fungicide, and Rodenticide Act (“FIFRA”) require the U.S Environmental Protection Agency (“EPA”) to regulate pesticides, which are defined to include herbicides.  A pesticide product may not be distributed or sold in the United States until EPA has issued a registration under FIFRA.  A registration functions as a license setting forth the conditions under which the pesticide may be sold, distributed, and used.  The EPA may not issue a registration for a pesticide that causes “unreasonable adverse effects on the environment.” In 2007, Congress added a new process called “registration review” to the FIFRA scheme governing pesticides, instructing EPA to review pesticide registrations every fifteen years periodically.  For pesticides registered before 2007, such as glyphosate, EPA must complete the first registration review by October 1, 2022.

EPA began its registration review of glyphosate in 2009 and completed a preliminary ecological risk assessment of the pesticide in 2015.  That assessment concluded that glyphosate may pose certain risks to mammals and birds and may adversely affect terrestrial and aquatic plants, primarily from spray drift.  The EPA also released a draft human health risk assessment and a paper about glyphosate’s carcinogenic potential, entitled the Revised Glyphosate Issue Paper: Evaluation of Carcinogenic Potential (“Cancer Paper”), which concluded that glyphosate posed no serious human-health risks and should be classified as “not likely to be carcinogenic to humans.”

In January 2020, EPA issued an Interim Registration Review Decision for glyphosate (“Interim Decision”), which: (1) announced that its earlier draft human health and ecological risk assessments were final; (2) contained a brief cost-benefit analysis concluding that the benefits outweighed the potential ecological risks when glyphosate is used according to label directions; and (3) laid out various mitigation measures, in the form of label changes for glyphosate products, to reduce the potential ecological risks.  According to the Interim Decision, EPA still planned, among other things, to complete an assessment of glyphosate’s effect on endangered and threatened species under the Endangered Species Act (“ESA”).

Two groups of petitioners filed petitions for review of the Interim Decision: one led by Rural Coalition and the other led by Natural Resources Defense Council (“NRDC”).  Rural Coalition’s petition made two attacks on the Interim Decision.  It challenged EPA’s conclusions on human health and insisted that EPA should have followed the ESA’s procedural requirements before issuing the Interim Decision.  NRDC’s petition primarily challenges EPA’s ecological risk assessment, cost-benefit analysis, and risk-mitigation requirements.   The panel first considered Rural Coalition’s challenge to EPA’s conclusion that glyphosate poses “no risks to human health.”  That conclusion rested in important part on EPA’s determination, explained in its Cancer Paper that glyphosate was not likely to be carcinogenic to humans.

The panel held that EPA’s conclusion was in tension with parts of the agency’s analysis and the 2005 Guidelines for Carcinogen Risk Assessment (“Cancer Guidelines”), which EPA purported to follow.  The panel noted that earlier in the Cancer Paper, EPA had explained that a conclusion regarding the association between glyphosate exposure and risk of non-Hodgkin’s lymphoma (“NHL”) could not be determined based on the available evidence.  The panel stated that EPA could not reasonably treat its inability to conclude NHL risk as consistent with a conclusion that glyphosate is not likely to cause cancer within the meaning of the Cancer Guidelines.  Because inconsistent reasoning cannot survive substantial-evidence review, the panel concluded that EPA’s determination that glyphosate was not likely to be carcinogenic was not supported by substantial evidence.

The panel next addressed Rural Coalition’s claim, alleging that EPA impermissibly failed to follow the ESA consultation procedures before issuing the Interim Decision.  The ESA protects endangered and threatened species, in part, by requiring federal agencies to consult with the U.S. Fish and Wildlife Service or the National Marine Fisheries Service.  The consultation procedures begin with an agency reviewing its actions at the earliest possible time to determine whether any action may affect listed species or critical habitat, resulting in an effects determination.

The panel determined that Rural Coalition had the standing to bring an ESA claim.  Rural Coalition’s members submitted declarations stating that they regularly engaged in educational and recreational activities involving a variety of endangered species and that glyphosate was threatening their interests by exposing those species to toxic runoff and residues on vegetation.  Members, therefore, had cognizable interests for purposes of standing.  Rural Coalition also established causation by showing that EPA might have required more mitigation efforts had the agency completed the ESA’s procedures before issuing the Interim Decision and redressability by showing that, at the time the petition was filed, court-ordered relief was possible.  The panel rejected intervenor Monsanto’s argument that EPA’s recent consultation efforts mooted the case.

Turning to the merits of the ESA claim, the panel held that EPA’s registration review decision under FIFRA was an “action” that triggered the ESA’s consultation requirement; EPA actively exercised its regulatory power, completing an assessment of glyphosate’s risks under FIFRA and delineating what constituted acceptable glyphosate use under the statute’s safety standard.  EPA, therefore, had to comply with the ESA by making an effects determination before issuing the decision.  It was undisputed that EPA did not do so.  Accordingly, EPA violated the ESA.  Nevertheless, the panel declined to order relief for the ESA violation, noting that, according to the timeline imposed by Congress, EPA must complete its final registration review decision—including the formal Fisheries Service.  The consultation procedures begin with an agency reviewing its actions at the earliest possible time to determine whether any action may affect listed species or critical habitat, resulting in an effects determination.

The remaining issue involved petitioners’ challenges to the Interim Decision’s ecological risk assessment, determination of glyphosate’s costs, cost-benefit analysis, mitigation requirements (collectively, the “ecological portion”), and EPA’s responsive motion for remand. The panel granted EPA’s motion to remand without vacatur as to the ecological portion of the decision. Still, it required EPA to issue a new ecological portion by the October 2022 FIFRA deadline. Because the panel granted EPA’s motion, it did not reach the parts of NRDC’s and Rural Coalition’s petitions that challenged the remanded portion of the Interim Decision.

In a collateral matter, Monsanto's Petition for a Writ of Certiorari ( Monsanto v. Hardeman, Docket No. 21-241) before the US Supreme Court was denied on June 21, 2022. The petition for Certiorari addressed: