Misclassification: 16 Workers Held to be Employees

An employer need not control every facet of a person's responsibilities for that person to be deemed an employee.

The Commissioner’s finding that East Bay did not supply sufficient information to prove the workers’ independence under the ABC test’s prong C was not arbitrary, capricious, or unreasonable but rather was supported by the absence of record evidence as to that part of the test.

The NJ Supreme Court held that all sixteen workers in question are properly classified as employees, and it remands to the Department for calculation of the appropriate back-owed contributions. 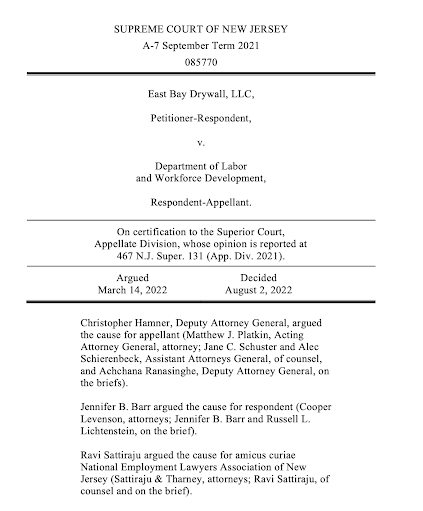 In this appeal, the Court considers whether certain workers employed by East Bay Drywall, LLC, are properly classified as employees or independent contractors under the Unemployment Compensation Law, which sets forth a test -- commonly referred to as the “ABC test” -- to determine whether an individual serves as an employee. See N.J.S.A. 43:21-19(i)(6)(A) to (C).

East Bay is a drywall installation business that hires on a per-job basis. Once a builder accepts East Bay’s bid for a particular project, East Bay contacts workers -- whom it alleges to be subcontractors -- to see who is available. Workers are free to accept or decline East Bay’s offer of employment, and some workers have left mid-installation if they found a better job. East Bay’s principal testified that some workers said they worked for businesses aside from East Bay but admitted that he did not produce any evidence to support that claim. East Bay provides the workers with the raw materials necessary to complete the drywall installation. The workers perform the labor but must provide their own tools and arrange for their own transportation to the worksites. East Bay does not dictate who or how many laborers the workers must hire to complete the project. Although East Bay does not direct how the workers install drywall, the principal made clear East Bay remains responsible for the finished product.

On June 30, 2013, East Bay, a business registered as an employer up to that point, ceased reporting wages to the Department of Labor and Workforce Development. Consequently, an auditor for the Department conducted a status audit that reviewed the workers East Bay hired between 2013 and 2016 to determine whether they were independent contractors, as defined by the ABC test, or employees of East Bay, requiring the employer to contribute to the unemployment compensation and temporary disability funds. In addition to meeting with East Bay’s principal and accountant, the auditor requested documentation such as tax forms, business cards, and business insurance to determine whether the workers’ businesses were independent entities.

The auditor ultimately found that approximately half of the alleged subcontractors working for East Bay between 2013 and 2016 -- four individuals and twelve business entities -- should have been classified as employees. The Department informed East Bay that it owed $42,120.79 in unpaid unemployment and temporary disability contributions.

East Bay contested the results of the audit and requested a full hearing in the Office of Administrative Law, which concluded that three of the workers were employees but that the other thirteen were independent contractors. The Commissioner of the Department, who makes the final agency determination in such matters, determined that all sixteen workers failed all three prongs of the ABC test and that they were therefore all East Bay’s employees. The Appellate Division affirmed the Commissioner’s final determination as to five workers but reversed as to the eleven other workers. 467 N.J. Super. 131, 150-52 (App. Div. 2021). The Department appealed as to the eleven workers, and the Court granted certification. 248 N.J. 400 (2021).

HELD: The Commissioner’s finding that East Bay did not supply sufficient information to prove the workers’ independence under the ABC test’s prong C was not arbitrary, capricious, or unreasonable, but rather was supported by the absence of record evidence as to that part of the test. The Court is satisfied that all sixteen workers in question are properly classified as employees, and it remands to the Department for calculation of the appropriate back-owed contributions.

1. The Unemployment Compensation Law (UCL), N.J.S.A. 43:21-1 to -71, was designed to act as a cushion “against the shocks and rigors of unemployment.” Carpet Remnant Warehouse, Inc. v. Dep’t of Labor, 125 N.J. 567, 581 (1991). It requires that employers and employees make contributions to the unemployment compensation and temporary disability benefit funds. Those contributions come from “a specified percentage of the employee’s wages.” Id. at 582 (citing N.J.S.A. 43:21-7). An employer’s contributions are due once the employer pays the employee. N.J.A.C. 12:16-5.1(a). N.J.S.A. 43:21-19(i)(1)(A) defines employment as “[a]ny service . . . performed for remuneration or under any contract of hire, written or oral, express or implied.” But, even if a worker receives compensation for work performed, the worker will not be considered an employee if the ABC test is satisfied. See id. § 19(i)(6). The ABC test is conjunctive; thus, all three prongs must be satisfied for a worker to be considered an independent contractor. The ABC test presumes a worker is an employee. The party challenging the Division’s classification carries the burden to “establish the existence of all three criteria of the ABC test.” Carpet Remnant, 125 N.J. at 581. Whether a worker is an employee under the ABC test “is fact-sensitive, requiring an evaluation in each case of the substance, not the form, of the relationship.” Ibid. (pp. 16-18)

2. Because the Court finds that East Bay did not supply sufficient information to satisfy its prong C burden regarding the eleven entities whose classification has been challenged by the Department, it does not analyze prongs A and B of the ABC test. The Court suggests, however, that the Department exercise its statutory authority and expertise, particularly in light of the prevalence of remote work today, to promulgate regulations clarifying where an enterprise “conducts an integral part of its business” and what constitutes the “usual course of the business” under prong B of the ABC test. See N.J.S.A. 43:21-7g; N.J.A.C. 12:71-1.3. (pp. 18-19)

3. Prong C of the ABC test broadly asks whether a worker can maintain a business independent of and apart from the employer. If the worker “would join the ranks of the unemployed” when the relationship ends, the worker cannot be considered independent under prong C. Carpet Remnant, 125 N.J. at 585-86. In some cases, it will be obvious that a worker was entirely dependent upon an employer because, when the working relationship ends, the worker is fully unemployed. In other cases -- where it is not as clear that the worker will be unemployed without the working relationship -- other factors may be illustrative of the underlying public policy at stake. For such situations, case law provides a variety of factors to be considered when evaluating a worker’s “ability to maintain an independent business,” and the Court reviews those factors, including the factors set forth in Carpet Remnant, 125 N.J. at 592-93. (pp. 19-22)

4. In the instant case, the information East Bay provided is insufficient to prove the entities’ independence. The probative value of refusal to accept or complete work is limited because, like an employee, even a bona-fide independent contractor is not free from the pressure to accept a job. A certificate of insurance could be a significant indication of independence, and business registration information may bolster the inference of independence. Here, however, these documents do not elucidate whether the disputed entities were engaged in independent businesses separate and apart from East Bay. The case at hand presents one of those less- obvious situations of whether the workers are truly independent business entities, but East Bay has provided little or no documentary evidence to address the factors that indicate independence. The Court therefore finds that the Commissioner’s final decision was not arbitrary, capricious, or unreasonable, and it defers to that agency decision. See id. at 587. That decision is consistent with the public policy codified in the UCL. (pp. 22-26)