The State of New Jersey is suing Ford Motor Company [FMC] for environmental pollution due to dumping its toxic waste in Ringwood, New Jersey. FMC operated a huge assembly plant in Mahwah, New Jersey, from 1955 through June 1980.

The facility produced 6 million cars during its 25-year history. It is alleged that FMC hired a company to cart off its toxic waste to old mine property that FMC owned in Ringwood. The allegations in the lawsuit state that the carting company “disposed of trash, paint sludge, drummed waste and other non-liquid wastes from the plant on the ground and in pits and abandoned mine shafts at various locations within Ringwood Mines.” 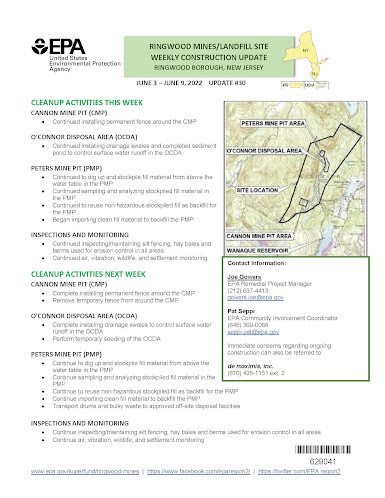 Those who worked in and about the area may be eligible for workers’ compensation benefits for related medical conditions as a result of the occupational exposure. Individuals should consult an attorney-at-law to review the matter on a timely basis.

The chemicals dumped in Ringwood were toxic substances, including but not exclusive to:

Acting Attorney General Matthew J. Platkin and Commissioner of Environmental Protection (DEP) Shawn M. LaTourette announced last week that the DEP has filed suit against Ford Motor Co. over its contamination of hundreds of acres of soil, water, wetlands and other natural resources in Passaic County.

The lawsuit seeks compensation for Natural Resource Damages (NRDs) caused by Ford’s disposal, over many years, of toxic paint sludge and other pollutants within a former iron mining area known as Ringwood Mines in the Borough of Ringwood.

Among other things, the 500-acre Ringwood Mines area encompasses the historic homeland of the Ramapough Lenape Nation, a Native American Tribe formally recognized by the State.

Many of the approximately 200 residents who live within Ringwood Mines are Tribe members, and the community meets the criteria for an “overburdened community” as defined by New Jersey’s Environmental Justice Law aimed at equitably protecting low-income, minority and/or non-English speaking communities from environmental pollution. The site at issue is known as the Ringwood Mines/Landfill Superfund Site.

“Today we hold Ford accountable for Natural Resource Damages — for knowingly polluting some of the State’s most precious environmental assets, then walking away without disclosing the toxic mess they had made or attempting to mitigate the harm,” said Acting Attorney General Platkin. “To other corporate polluters and anyone else so inclined, our message is simple: treat New Jersey’s air, land, and water like your own private dumping ground and we will not look the other way. We will hold you responsible, and we will make you pay.”

“No matter our race, income, or ancestry, every resident of the State of New Jersey is entitled to the good care and enjoyment of our natural, historic, and cultural resources,” Commissioner LaTourette said. “When those resources are damaged by polluters who knew better and could do better, the State has a duty to step in on behalf of our residents and their resources to demand accountability. Today we make that demand of Ford for its history of polluting the land and degrading the natural resources that belong to the people of New Jersey, including those once enjoyed by members of the Ramapough Lenape Nation for whom we must further the promise of environmental justice.”

Filed today in New Jersey Superior Court, the State’s lawsuit alleges that Ford purchased Ringwood Mines in 1965 for the express purpose of using it as a landfill where it could dispose of hazardous waste generated by its auto assembly plant in Mahwah – at one time the largest auto assembly plant in the U.S.

Between 1967 and 1974, the complaint recounts, Ford disposed thousands of tons of toxic paint sludge in the forests and on the grounds within Ringwood Mines, as well as in its abandoned mineshafts and pits. Multiple other pollutants were dumped there as well, including various non-liquid pollutants and waste stored in drums.

Subsequently, Ford either donated or sold off all of its contaminated Ringwood Mines properties while fully aware – but without disclosing – that those properties were contaminated with hazardous and toxic wastes, the complaint notes.

Ford’s actions were “deliberate acts or omissions taken with a wanton and willful disregard for the welfare of the residents of New Jersey” and caused harm to the air, soil, groundwater, surface water, wetlands, and biota within Ringwood Mines, threatening human health, wildlife and aquatic life in the process.

Harmful substances found at the site include lead, arsenic, benzene, polychlorinated biphenyls (PCBs), semi-volatile organic compounds, chrysene and 1,4 dioxane, a colorless solvent believed to be a carcinogen, as well as other pollutants.

Between 1983 and 1994, EPA listed the property on its National Priorities List. The site was deleted from the list in 1994 following Ford’s removal of about 8,300 cubic yards of paint sludge and soil.

However, newly discovered pockets of paint sludge were found on site in 1995, 1998 and 2004, and DEP testing of nearby residential properties in 2005 showed elevated lead levels in the soil.

In 2019, Ford agreed to pay the State $2.1 million to cover DEP’s past costs related to cleanup and disposal of the paint sludge and other contaminants within Ringwood Mines. The $2.1-million payment was part of a state-federal settlement that resolved allegations of liability for costs incurred by both DEP and the EPA as a result of Ford’s long-term dumping.

The same 2019 settlement called for Ford to perform cleanup work in a specific portion of the Ringwood Mines property designated as Operable Unit 2, and involved remediation of sections known as the Peters Pit Mine Area, the Cannons Mine Pit Area, and the O’Connor Disposal Area.

In addition to seeking compensation for lost natural resources, today’s lawsuit seeks punitive damages and penalties due to Ford’s “wanton and willful disregard for the people of New Jersey” as shown by its discharge of hazardous substances directly into the environment, failure to notify DEP of those discharges, and Ford’s ongoing “concealment of the full extent of the contamination.”

Is Medicare-For-All a Prescription for Infectious Diseases in the Workplace? 6/19/22

Burn Pit Benefits: The US Senate Passed The Pact Act 6/17/22